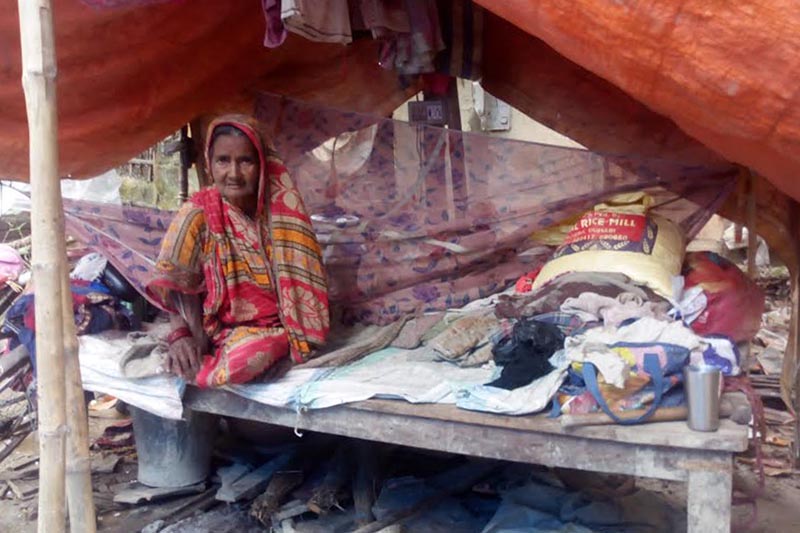 Flood victim Ram Kumari Devi Mandal, 70, sitting inside a makeshift tent after her house was swept away in floods, in Biratnagar Metropolitan City, Morang, on Monday, September 4, 2017. Photo: THT
Biratnagar, September 4 Flood victims of Biratnagar Metropolis complained that they did not receive any substantial relief so far. Flood victims of Baluwahi in Biratnagar-8 said they could not live a normal life even three weeks after the floods. They further said they did not get relief materials. “The government provided us with two kg rice and a tent a week after the floods. Thereafter neither the government nor any other organisation turned up here for relief,” regretted flood displaced Ram Kumari Devi Mandal, 70. “How long can we sustain with two kg rice?” she questioned. Another victim Fulo Devi Mukhiya of the locality said nobody reached the site with relief except the government, which provided them with meagre relief. She suspected irregularity in relief distribution. The victims said that Ward Chairperson Nishchal Aryal did not even visit their settlement though he made big promises during the polls. Irate locals accused Aryal of being biased in relief distribution. Another victim Madan Mandal said, “Though around 70 households were completely displaced at Laxmi Narayan Chowk, nobody came to their help. How long can we survive with 2 kg rice given by the government?” he asked. “Many people have fallen ill. They have been living on empty stomach for days. We heard about health camps in other places but nobody has shown concerns about our health,” said the victims. However, Ward Chair Aryal said they had distributed relief to all victims proportionally forming an all-party mechanism.
#Biratnagar #flood victims #relief for flood victims
You May Also like: