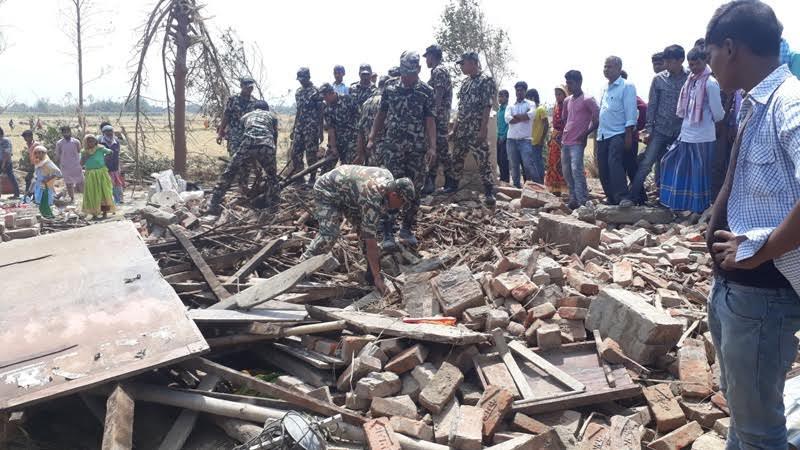 File - A team of Nepali Army removing debris in Pheta Rural Municipality, Bara, on Monday, April 1, 2019. Photo: THT
Kathmandu, April 26 Nepali Army has said it will complete reconstruction of all 1,453 houses damaged by tornado in Bara and Parsa districts by July-end. NA Spokesperson Brigadier General Bigyan Dev Pandey told THT that NA had already deployed troops for the reconstruction project in the districts. A tornado had hit the two districts on March 31  killing at least 28, injuring hundreds and rendering thousands homeless.  Many of the tornado victims are still living in makeshift tents. The federal government has allocated Rs 846.90 million for reconstruction of the houses damaged by the tornado. Each tornado-affected family will get Rs 582,846 as housing grant. “Our troops will reach Bara and Parsa tomorrow and start the work,” Pandey said, adding that altogether 6,000 workers, including NA personnel, had been deployed to construct houses. NA will build 91 houses in Parsa and 1,362 houses in Bara. “We have divided the houses to be built in 12 clusters and the work on all the clusters will start simultaneously,” said Pandey. NA will build a one-storey house with two rooms, along with a toilet, for each household in coordination with the provincial government. The houses are being rebuilt by Nepali Army as per the decision taken by the government on April 4. The government had asked NA to rebuild houses damaged by the tornado before mid-monsoon. The houses are being rebuilt in line with People’s Housing Programme of the government. The federal government had granted the responsibility of rebuilding houses to NA, citing compulsion on part of the provincial government and local levels to adhere to the Public Procurement Act, which, it said could delay the reconstruction process. The government has already formed a five-member committee led by Province 2 Chief Minister Lal Babu Raut to facilitate the reconstruction process. Members of the committee include chief district officers of Bara and Parsa and representatives from the Ministry of Defence and the Ministry of Urban Development. Earlier, NA had built community houses in 14 districts after the 2015 earthquakes.
#Nepal Army #Bara Parsa tornado #tornado victims #reconstruction of tornado-hit houses
You May Also like: