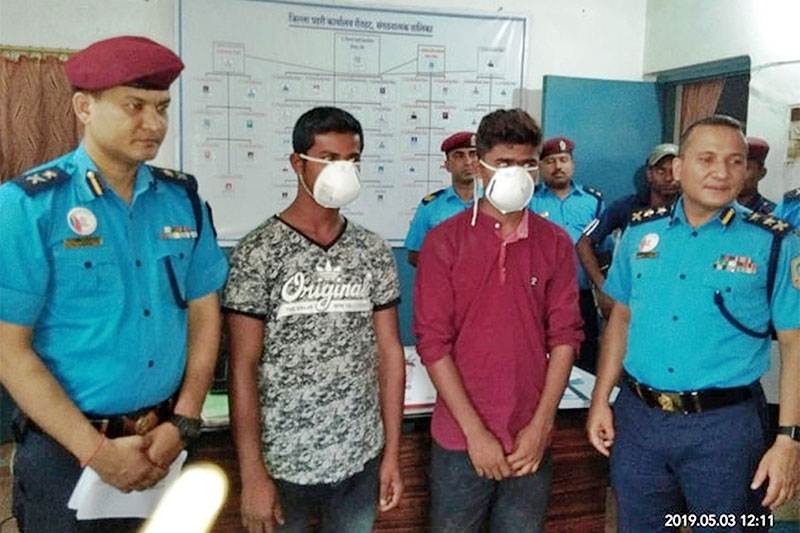 The suspects being made public at the District Police Office, Rautahat, in Gaur, on Friday, May 03, 2019. Photo: Prabhat Kumar Jha/THT
GAUR: Police said two persons have been arrested for allegedly intimidating a local plaza owner by planting a time bomb in front of his business complex in Gaur of Rautahat in a bid to extort Indian Rupees (INR) three million. Police made them public at the District Police Office in Gaur today. The arrested duo confessed to their crime to the police. DPO, Rautahat, identified the alleged extortionists as 26-year-old Prem Kumar Paswan of Bairganiya in Bihar state of India and 21-year-old Nanda Kishore Yadav of Gaur Municipality-5 in the district. According to Superintendent of Police (SP) Bhupendra Bahadur Khatri, police arrested the racketeers after they were caught placing an explosive in front of the plaza, on CCTV footage. Police seized four sets of mobile phones, one SIM card each of Nepal and India telecommunications service providers. SP Khatri quoted the suspects as saying that they planted the bomb in front of the plaza to demand INR 3 million from Santosh Keshari, owner of the electronic plaza in the area. SP Khatri further said that the arrested duo would be booked under the existing law. Meanwhile, the suspects were presented before the court and remanded in custody for further investigation, SP Khatri added.
#bomb threat #Rautahat district
You May Also like: