War not yet over: Bhattarai 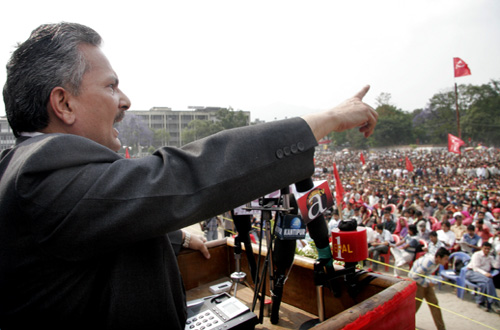 KATHMANDU: Referring to recent statements against federalism and secularism from various quarters of the society, Vice-chairman of the Unified CPN-Maoist Dr Baburam Bhattarai today said that people's war was not yet over and his party could continue the war until it achieves its goal.
"People are still unaware that our party had not denounced violence even after signing of 12-point agreement with the seven parties,” said Dr Bhattarai while addressing a book launching ceremony of "The Final Days of the People's War" penned by senior journalist Manarishi Dhital.
“We had decided to develop People's Liberation Army (PLA) to seven divisions during the Chunbang meeting with an intention to lead both the peaceful and the armed movement together so as to achieve our goal.”
Parliamentarian parties have been focusing on dismissing the PLAs who had fought for the republican set up but never talk about democratising the Nepali Army, he said.
Dr Bhattarai added, “Recent comments against federalism and secularism from different people indicates that the incidents described in the book could be semi-final days instead of the final days,” he commented. "This book, however, indicates how powerful the army equipped with ideology could become."
He said the book was reportage of representative events of the people's war. "Dhital has tried to reveal some of the facets of the war,” he said adding, “I wish that those days be the final days, though.”
The specialty of the Nepali people's movement was an appropriate blend of armed and peaceful struggle. He also claimed that late Girija Prasad Koirala had the best knowledge of power and the meaning of violence and he used to urge the Maoists to attack the royal regime.
Meanwhile, UCPN-M politburo member Janardan Sharma 'Prabhakar' said the book was only a chapter of his 'unwritten book'. He also praised the role of media in promoting the cause of the Maoists in establishing the truth. He also wished that the title of the book 'the final days' be worthwhile. He, however, claimed that he has doubt over the title because he has seen conspiracy being hatched against aspiration of the people so war could be a necessity again.
He also revealed that the then king Gyanendra had led the command from Pokhara during the people's movement when the Maoists were on Gandak Campaign to topple the royal regime. He also said he had read out a message from late Nepali Congress President Girija Prasad Koirala following attack Palpa.
Likewise, journalist Ananda Sworup Verma from India claimed that facts of people's war were presented in distorted forms and many of the significant developments were ignored by media assuming that it would benefit the rebellions.

#War not yet over: Bhattarai
You May Also like: