Corruption in the health budget has crippled Nepal’s health system. Given the scarce resources, the funds lost through it could otherwise buy lifesaving medicines and supplies, fund operations and hire more skilled health workers 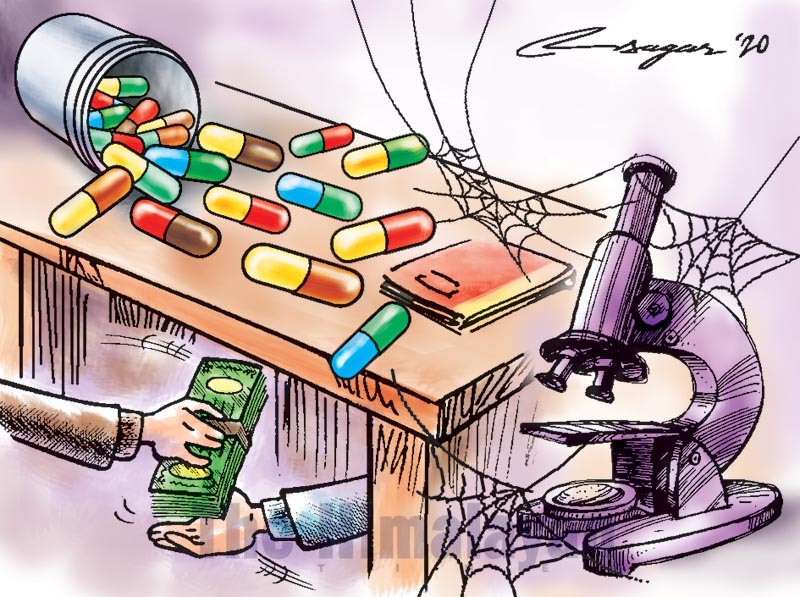 Illustration: Ratna Sagar Shrestha/THT
The Nepali government allocates not much of its total budget for healthcare: less than 5 per cent. Because of financial embezzlement, healthcare is left with even less money. One report estimated that more than 5 per cent of the global health budget is lost to corruption even before it leaves the central government offices—from my personal experience the number is much higher for Nepal. According to the 2018 Corruption Perceptions Index, Nepal is among the world’s most corrupt countries (ranking 124 out of 175). A well-run healthcare system requires not only sufficient funding but also effective spending. If wisely spent, resources could cover more people’s needs. According to the World Health Organisation, most countries could achieve significantly greater health system performance even at the current level of healthcare spending. Corruption in the health budget has crippled Nepal’s health system. The money lost to corruption degrades the quality of healthcare and reduces the availability and utilisation of services. In a country like Nepal where resources are already scarce, the funds lost through corruption could otherwise buy lifesaving medicines and supplies, fund operations and maintenance, and hire more skilled health workers. Many Nepalis have lost their lives owing to corruption in the health sector. I have witnessed corruption in the purchase and distribution of medicines, which ultimately causes a shortage of drugs. Nepal’s high child mortality rate can also be partly attributed to the shortage of oral rehydration salts for children with diarrhoea, which owes to corruption, as well as to corruption in the immunisation programme. Shortage of medicine compels patients to pay for it. Besides, broken medical equipment is often left unrepaired. Healthcare managers prefer to purchase expensive new equipment rather than repair the existing one as there is a huge kickback on the purchase. Patients are forced to visit a private health facility due to interruption of the services. This undermines Nepalis’ trust in healthcare services. Corruption in the procurement of drugs is a big problem. Health officials usually expect illegal financial benefits while purchasing drugs. As a result, substandard drugs with a high financial beneficial package are procured rather than what is needed for the community. Use of such drugs won’t make patients feel better, therefore, they are compelled to overuse and misuse antibiotics. Irrational use of antibiotics helps to breed resistant bacteria that lead to antimicrobial drug resistance, an increasingly scary problem here. Procuring out-of-specification and substandard medicines at any price is too expensive. This adds to a widespread perception that government medicines are of low quality. Corruption in Nepal has deep, complex roots in the social, cultural, economic and political systems. Hence, there are no easy ways to win over it; rather it requires in-depth research and thorough analysis. Increasing salary and social security for government employees could help. Integrating awareness about anti-corruption laws and the detrimental effects of corruption in the school curriculum might produce honest and accountable citizens. In October 2018, the government required civil servants to take an oath every day: ‘I will not indulge in corruption, I will prevent corruption and will honestly work for my country and people.’ But, I argue decision-makers urgently need to move beyond such ineffective anti-corruption measures. We need better regulation and monitoring, and effective penalties. Strong action against corrupt officials should take priority without political bias. Zero tolerance against corrupt practices by both healthcare providers and consumers, and policies to protect whistleblowers are equally important. Tackling corruption in the health system is difficult, but not impossible. The responsibility to tackle corruption does not belong only to the Commission for the Investigation of Abuse of Authority. The Nepal Medical Association, National Human Rights Commission and trade unions should also play a proactive role in the enactment of such laws for transparency and accountability in healthcare. Media engagement is equally important. Media should not be limited to the information provided by the anti-corruption bodies; rather it should do more investigative journalism to uncover deep-rooted corruption in the health system. Recently, Nepali media set a global example by covering the story of district health officials who pocketed cash allowances by creating a list of fake mothers. Life is precious. Quality healthcare is a human right. Corruption in health care is neither normal nor acceptable; it is a crime. Jaishwal is a Fulbright scholar and International Peace Scholar
#corruption #Corruption in health care #Health care corruption #Healthcare corruption
You May Also like: