As the country strives for 100 per cent literacy, some young volunteer teachers are setting an example by entering government schools not only to provide quality education but also to address challenges faced by girls in accessing education 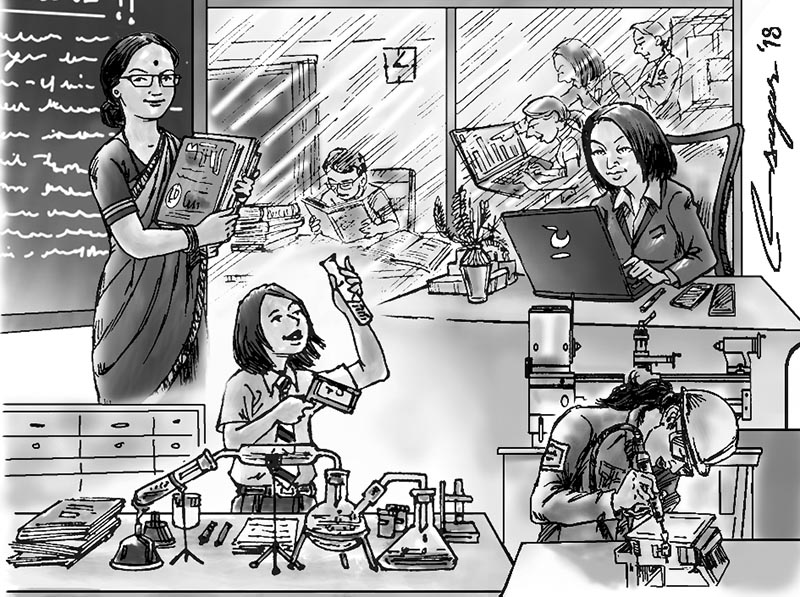 Illustration: Ratna Sagar Shrestha/THT
Government of Nepal has set the goal of having 100 per cent literacy by 2020. In the entire population of the country, the most disadvantaged group has been the female population. As of 2014, only 62 per cent of young women with primary education and between 15 and 24 years of age were considered literate. Because of patriarchal practices, most of our rural communities still bar young girls from attending schools. Although female literacy has improved to 95 per cent in urban areas, literacy rate among young rural women is still struggling — at 82 per cent.   Besides that, factors such as child marriage, menstruation, girls’ trafficking and lack of legal advising on accessible education are also hindering female education in Nepal. With all these existing problems, the goals of having 100 per cent literacy and complete students’ enrolment have become questionable. Nevertheless, self-empowered, young, and outstanding volunteer teachers are entering government schools recently not only to provide quality education but also to address the above-mentioned challenges with a more integrated approach to education. In Sindhupalchok district, such youths have been volunteering through an organisation for four years as part of a movement to end educational inequity and injustice. Their practice and dedication demonstrate the true essence of the Sustainable Development Goal 4 — “Education”. At present, 37 of such young teachers are volunteering at 17 different government schools in Sindhupalchok. In Pachpokhari Thangpal Rural Municipality, the effectiveness of their work is becoming very conspicuous as both boys and girls are getting together to stop child marriage of their female friends at several occasions. Though child marriage has been illegal in Nepal since 1963, the practice is still rife in some communities. Early marriage not only robs children of their childhood but also poses serious health risks, especially to girls. Marriage at an early age also means children, particularly girls, are deprived of their fundamental right to get education. Similarly, at a school in Manekharka of the same municipality, these volunteer teachers have counselled students about menstrual hygiene. Menstruation is a major barrier to girls’ education. Female students often skip school and lack proper sanitation materials when they are menstruating. Then there is lack of awareness about menstruation among some people due to which menstruating girls often do not want to come out of homes. And even if some girl students try to attend schools during their period, they find it difficult to remain at school for the lack of proper toilet and water. Lack of sanitary pads on most of the occasions keeps menstruating girls away from school. Therefore, these volunteer teachers have been working with students — both boys and girls — to come up with a proper sanitary pad. They even invited people from other organisations to demonstrate ways to make such pads locally using easily available resources. These students do not only promote such sanitary pads in their communities but also take part in exhibitions and sell those pads to benefit financially. In Giranchaur, two volunteers took a really ambitious step to stop girls’ trafficking. Often, relatives take young school-going children, preferably girls, to India for child labour. When a girl student was absent for many days in a row, these volunteers were suspicious. With assistance from the school, they communicated with an organisation, working against child trafficking. Finally, they were able to stop the child at a Nepal-India border. Their action has become a source of inspiration for others in the school and the community. Volunteers have also initiated legal advocacy against child trafficking and early marriage through street dramas in Terse, Sindhupalchok. They believe that people become more aware when they are informed about the legal aspects of a problem and its consequences. So, why do we need to focus so much on female students? Education no doubt is the most powerful investment for our future. But educating girls has more powerful implications in family, society, community and the nation. Education empowers girls, gives them freedom to make decisions and plays a crucial role in reducing gender inequality. While child marriage is identified as the biggest obstacle to girls’ participation in school, educating girls can immensely help in ending child marriage. It has been observed that 89.4 per cent of mothers with higher education would like their child to attend at least eight grades compared to 81.2 per cent of mother with no education. Hence, educating a girl child is more important given the fact that she has to face all the challenges mentioned above and is at the higher risk of dropping out of school. After all, she will be a mother herself some day and will have a primary responsibility of educating her own child. The current practices, at government schools, often misses this point and that is where young and energetic volunteer teachers have been leaving their marks. It is evident that they have a better understanding of the fact — the teaching-learning process can be impactful only when it is more inclusive and more equitable.
#Educating girls #transforming society
You May Also like: