Evergreening of loans: Can we prevent it?

The economic impact of evergreening is like a slow poison to the economy as it disturbs the economic value of democracy while becoming a tool for money laundering. Its spillover effect has manifold impact

Evergreening of loans and evergreen loans are two different concepts. Evergreen loans, also known as revolving loans, are those which can be used, paid back and used again once the loan is reviewed or the renewal criteria is met. However, here we will be discussing about the evergreening of the facility, which is an intentional manoeuvre by banks and financial institutions (BFIs) to mask loan default, probable default by disbursing new loans to help delinquent borrowers pay back their old and due loans or interest. It is malpractice whereby the BFIs extend more loans to highly leveraged firms and clients to help them repay those pending accounts and, in turn, receive lavish returns. 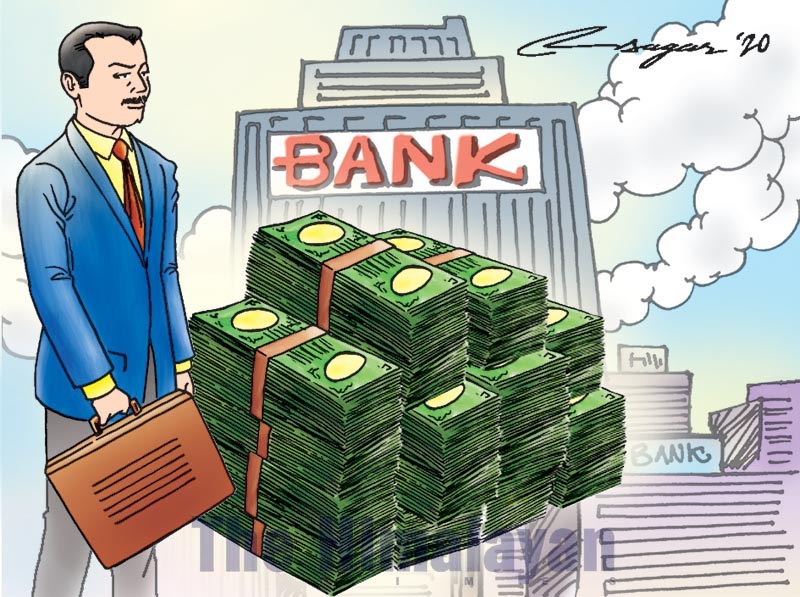 Illustration: Ratna Sagar Shrestha/THT
In a recent inspection made at an institution, a reputed businessman was found to have withdrawn a handsome loan from a bank to settle a bad loan of his near and dear one in another development bank. Such practices are widespread in the Nepali banking industry. Though it is necessary to reduce the level of bad loans genuinely through the efforts of the BFIs, this will instigate a devastating economic implication if such effort to enervate the bad loans germinates from evergreening. Loan evergreening is not a child of a single uterus. It might sprout out of multiple outlets. With regard to the severity of impact and complexity of nexus identification, evergreening in the Nepali financial market, apart from the methods discussed above, can be categorised into four major levels. First, settlement of one demand loan, or a similar natured loan, within a bank by disbursing the next demand loan deal. This is easy to identify and has feeble impact on the economy as BFIs allege that the deals are settled with new ones within the legitimate limits prescribed to the client. Second, non-revolving credit of a delinquent account within a bank is settled with one-off loan or ad hoc deals out of the regular DP (drawing power) limits. Third, a delinquent borrower within a bank is served with another borrower within a bank with fresh disbursement to the second party. This is usually done at the end of the year or quarter, especially to a renowned counterparty or businessman to mask their faulty account and reduce the NPAs (non-performing assets). Fourth, the well-off person or business firm, or fair performing account, gets a regular fund within the limit or exceeding the limit to drag the fund to multiple institutions to settle problematic or due accounts on ground of personal or business relationship. The degree of complexity in terms of nexus and severity of impact of the four classes of evergreening gradually rises as we climb up the pyramid. As per the provision of Directives (16) issued by Nepal Rastra Bank to the BFIs, A class BFIs can collect unlimited funds, resources, borrowings, debentures while it is 20 times the core capital for B class BFIs. Till date, the amount of resources in the financial institutions (A, B,C class BFIs) sums up to Rs. 3,800 billion, which is almost 2.5 times as large as Nepal’s budget or greater than the GDP of the country collected from diverse group of depositors. We can envisage the implication of this huge sum of money if it is channeled to unproductive, purpose-less and unregulated activities. There are many instances where NRB has granted sufficient ground of pacifiers, such as interest capitalization during the moratorium period of priority sectors, loans for earthquake-stricken people based on collective guarantee and interest subsidy for commercial agriculture and livestock financing. Evergreening is a serious act yet covert issue that is difficult for the regulators and also BFIs to exactly demarcate. But, for sure, its economic impact is like a slow poison to the economy as it disturbs the economic value of democracy while serving as a tool for money laundering. The spillover effect of a faulty financial sector over the real sector has manifold impact. Regulators and other enforcing agencies have used the Banking Offences and Punishment Act 2064, mandatory provision of multiple banking, consortium financing agreement and CIC (Credit Information Company) reporting mechanism to enervate the evergreening practices in the banking industry, but the implementation and operational mechanism to complement the policy reforms is lacking. A red code system to track evergreening, in coordination with the NCHL (Nepal Clearing House Limited) and other concerned law enforcing agencies, should be devised to address the issue. The unique code for large and frequent borrowers (amount can be fixed during policy making process) to monitor the disbursed fund at the source would enable data dumping from a master database to ascertain if evergreening has  actually been made. The pyramid structure monitoring mechanism to see if more than 30 per cent value of the fund has been transferred out of a loan account without any business relationship, concomitantly identifying the source of the origin, is appropriate, and this should be linked up to the red code to make it easier to validate if the repayment has come from legitimate personal income, justifiable business proceeds or through the sale of personal equity, else it is evergreened. Gautam is an Assistant Director at Bank Supervision Department, Nepal Rastra Bank
#democracy #Economic impact #Bank loan #Evergreening of loans #evergreen loans
You May Also like: