By Dhananjay Regmi and Jeffrey Kargel

There are more than two thousand lakes in the Nepal Himalaya, and we can make outlet control structure on selected lakes in major catchments and can plan in the long run to tackle the dry season energy crises 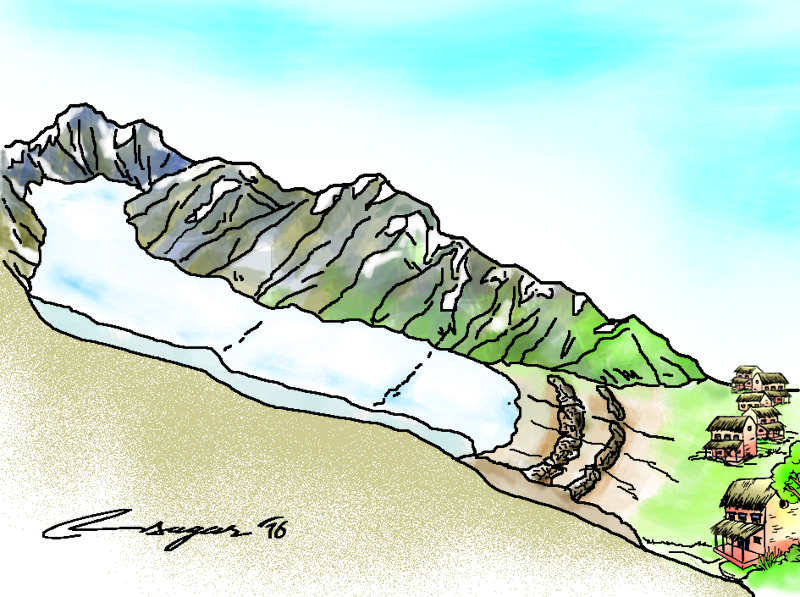 During the last two months, several articles have been published about the Imja Lake lowering project and disaster mitigation initiatives taken by Nepal Army and Hydrology and Meteorology Department (DHM).

The articles were highly informative, but they also were missing very important information about glacier lake formation, why they are considered dangerous, and whether lowering the lake water levels means that the downstream communities are safe forever.

Because of the changing climate and rise in temperature the glaciers of the Nepal Himalaya are retreating faster in recent decades. Satellite based image analysis shows that there are more than two thousand glacier lakes in Nepal’s Himalaya; these developed mostly after the 1960s.

These lakes are developed through the process of gradual melting, formation of a number of small supra glacial ponds on the surfaces of the glaciers, and then gradual growth and merging of the ponds and deepening of the coalesced lake by melting underlying ice. Commonly the glaciers’ terminal deposits (moraines) play the role of natural dams.

These deposits form where the end of the glacier is cut off from the active glacier by the widening and deepening glacial lakes. In many cases, the end moraines contain some remnants of glacier ice, which often is called “dead ice.” This ice provides strength and height to the terminal moraine.

Though this might sound like a good thing, actually the ice makes the moraine impermeable to water, so the impounded lakes grow very large; furthermore, the ice contained in the end moraines can melt over time, becoming filled with caverns and natural pipes.

As the end moraines degrade due to melting, they sometimes fail suddenly, and the water from the lake can burst out to make a GLOF. In a matter of minutes to hours, a large fraction of the lake volume can drain out.

There are several factors that initiate the GLOFs, such as melting and weakening of ice underneath the terminal moraine, seepage from the lateral and terminal moraine, excessive calving from the glacier terminus, rock and ice avalanches into the lake and formation of giant tsunami-like waves, detachment of submerged ice from the glacier floor and the waves resulting from it, and sometimes other natural disasters, e.g., earthquakes.

Like some other natural disasters (flood, landslides, avalanches, etc.,), GLOFs can be minimized in likelihood of occurring or magnitude when they do occur using different methods to decrease the volume of water in the lakes, e.g., outlet control structure, tunneling through the moraine barrier, controlled breaching using explosive and excavation, or by pumping or siphoning of water from the lake.

Potential GLOF mitigation through lake lowering is very common in the mountainous countries where the lakes are developing as a result of fast retreating of glaciers.

No doubt that the lowering of these lakes gave assurance to the people living downstream, but it should be considered whether downstream areas are then safer forever. Normally a lake that is hazardous enough to make an investment to lower the lake level will still pose some amount of hazard even after lake lowering; but the operative idea is that the risk is much reduced by the modest lowering.

The lakes must be closely monitored and the changes occurring with climate change should be taken into serious consideration for safety. If we start to develop these lakes as a tourism destination or as natural reservoirs of water, then these lakes can be better monitored, and the potential danger can be identified early and the risk can be reduced on time.

A reservoir project like Kulekhani is running just to fulfill the peak hour energy requirement. Considering the situation, we would like to put forward the concept of using glacier lakes as natural reservoirs and to release carefully regulated amounts of water just by opening and closing the gates to fulfill the peak-hour energy demands.

Thulagi (Dona) lake is already put on the list of most dangerous glacier lakes of Nepal. As per our team’s latest study, the lake has more than 40 million m3 of water. If the lake bursts out it may not only destroy 200 MW of running projects, but it also likely will completely sweep away the settlements.

Such situations will adversely impact the hydropower sector in the long run as financial institutions and donor agencies might back out of new hydroelectric power projects in Nepal in consideration of such hazards. So we can think about controlling the glacier lakes before they burst out, and we can use these lakes as reservoirs by building outlet control structures and reserving the water within the safety level.

We can make more than this by releasing the additional water during the peak load hours and we can easily overcome the load-shedding problem.

There are more than two thousand lakes in the Nepal Himalaya, and we can make outlet control structure on selected lakes in major catchments and can plan in the long run to tackle the dry season energy crises.

We need multiple agencies and a wide range of multidisciplinary scientific, geotechnical, engineering, and macroeconomic expertise, and national planning agencies and outside aid and investment partners to come together and create a strategy that will make a better and more secure Nepal.