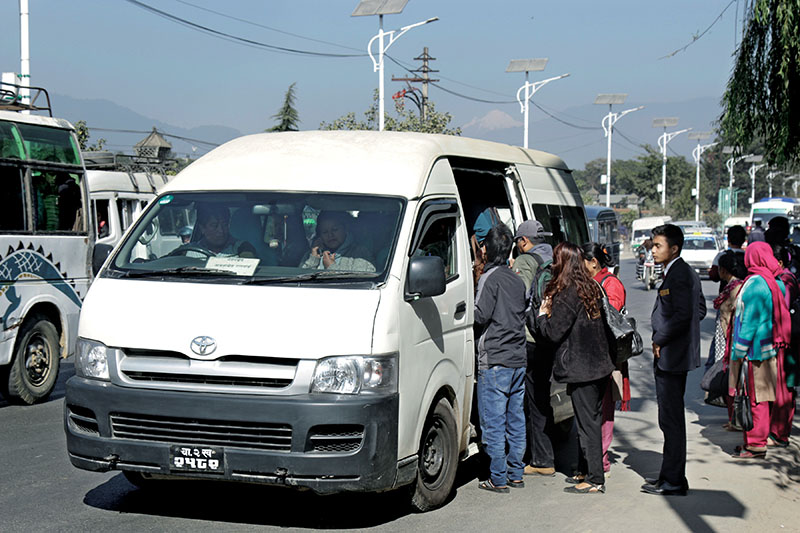 Queue of commuters to get aboard a microbus in Kathmandu, in November, 2016. Photo: THT
While I was waiting for a bus after buying some veggies at Balkhu, there was a large crowd of people doing the same. After some time a bus arrived and people started rushing towards the bus as if it was the last bus on earth. The entire scenario of people pushing and pulling each other to enter the bus just to grab a seat was very chaotic. There were small children, old people, women but nobody was in mood to practice any civic sense at the moment and every one of them was destined to go home. In the meantime, the khalasi kept on uploading passengers till all the surface area of bus was covered. The passengers were more than double the capacity the bus could hold. You have to travel bended, upright or straight as per the khalasi’s orders. After observing this pathetic scenario, a question arose in my mind. Do the lives of common Nepali have any dignity or self-respect? Where is our individualism? The philosophy that, every single life is precious has no meaning at all. The people are treated like sheep and goats headed towards slaughter houses. People, especially women, children and the elderly are helpless as they do not get any seat in the crowded buses. The entire transport system is extremely money driven; the life of traveler has no any value.  The bus tyres were making unusual sounds due to pressure of the overload and jolting of the bus. Any unfortunate incident can happen at any time in such a risky travel. My heart was pounding with fear and mind with anger. But where do I go and raise my voice? Is there any government agency to address this problem? If city life is full of such a mess one can easily imagine what the journey  will be in the rural and hilly areas where one does not get frequent bus service. Udgar Kumar Paudel, via e-mail Minimum Apropos of the news story “Pvt sector against minimum capital requirement”  (THT,  December 27, Page 11), our honchos need to understand that gone are the days when you could land in Nepal with ‘lota’ and ‘gamcha’ and transform into billionaires in no time. It is also mystifying that these honchos should resist a minimum two million rupees requirement for industries even as they drive around in SUVs costing over ten million rupees. Our honchos also forget that throwing peanuts will attract only monkeys. Peanuts and monkeys are conspicuously visible in travel business whose owners are journalists,  land brokers, manpowers, politicians, hydros, finance, handicrafts,  lawyers,  teachers, photographers - all rolled into one. I did not realize that you have monkeys in hydro as well until a chap got me interested in our great watery grave, spoke of billions and then started pestering me for a few lakhs. I was clearly expecting to be asked at least a crore and imagine my surprise when they asked for less than five percent of that. I asked how do they expect to earn billions, which is what they promised me, on investment of a few crores injected by 1000 people.  Can these people uplift hydros? Manohar Shrestha, Kathmandu
#capital requirement #Crowded bus journey
You May Also like: