Kudos to Dr. Kedar Karki for his article titled “Effects of alcohol abuse” (THT, August 17, Page 8). There is no doubt that alcohol is one of the greatest vice of society. The sponsors and promoters of alcohol like night clubs, pubs and discotheques are nothing but breeding ground of crimes and indecency of all hues. After all each and every ingredients of crimes are omnipresent in nightlife! As if philistinism of lewd lyrics and obscene dance with suggestive gestures, skimpily-clad girls, relative desolateness of night were not enough; its combination with alcohol proves deadly. This is the reason why reckless bike races, molestation, eve teasing, rapes, fights, drunken driving, accidents have tarnished the nights of “progressive” cities. Yes, almost each and every possible crime are committed by the intoxicated brigade as the monstrous influence of the deadly liquid rob the sanity of the consumer who in turn fails to recognize between good and bad. Also the deadly effects of alcohol bring out the beast in man. Moreover, innumerable families go bankrupt due to the reckless drinking habit of their earning members. And less said about the fatal effect of alcohol on health the better. Countless people have died prematurely or damaged their vital organs, thanks to this “nectar” alcohol! It is hoped that the administration will ban the sale and consumption of this deadly poison by resisting the immense pressure from the alcohol lobby and vested interests. Kajal Chatterjee, Kolkata

Monsoon Monsoon is beautiful, so is the rainfall. Its significance and beauty is ineffable. Many people love this season. 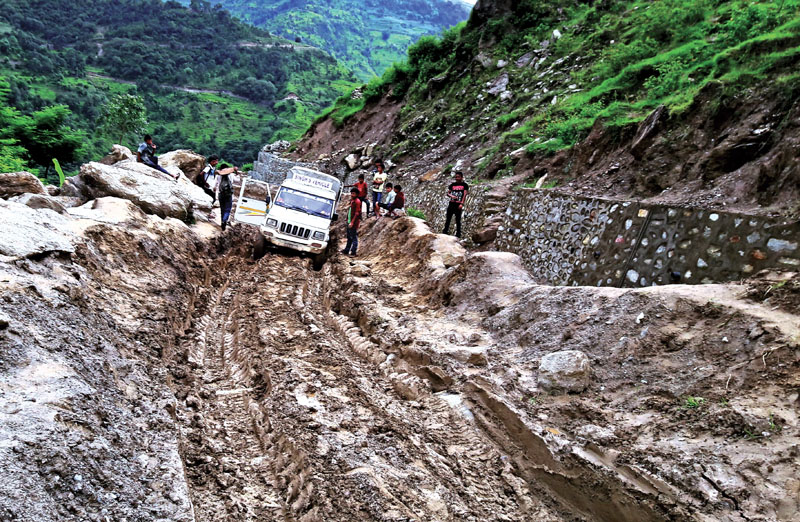 However, not all in the capital agree with this. Many are fed up with the muddy and dirty roads during the monsoon. Lack of proper drainage management is the problem everywhere in Kathmandu. It’s almost impossible for the ordinary people to reach their destinations without getting dirty. Damaged roads almost everywhere in Kathmandu are the problem during monsoon. The dust and pollution they create is what we are habituated to. Also the results of poor drainage management in many parts of the Valley can be seen after every rainfall. Our obtuse governmental authorities aren’t eager to work on this. First they pitch the road, then, they dig them for regular water pipe lines or in the name of Malamchi water lines. Their work schedule seems to be totally opposite of what it should have been. Before black-topping the roads, shouldn’t all the diggings be done? The main reason for muddy roads in the capital is that such roads are left without repairing. It is shameful that we couldn’t manage dust and drainage of the cities while the world is focusing on big issues like climate change that affects the monsoon and the overall world environment. Aren’t we part of the global society? While neighbouring countries like Bhutan is doing so much for the environment and climate change, we are sitting here with colossal pollution and mud on the roads that don’t look clean even in the monsoon rainfall. Anu Babu Bhattarai, Gaighat
#Monsoon #monsoon rainfall #alcohol #pollution #Dr. Kedar Karki #Malamchi water lines
You May Also like: