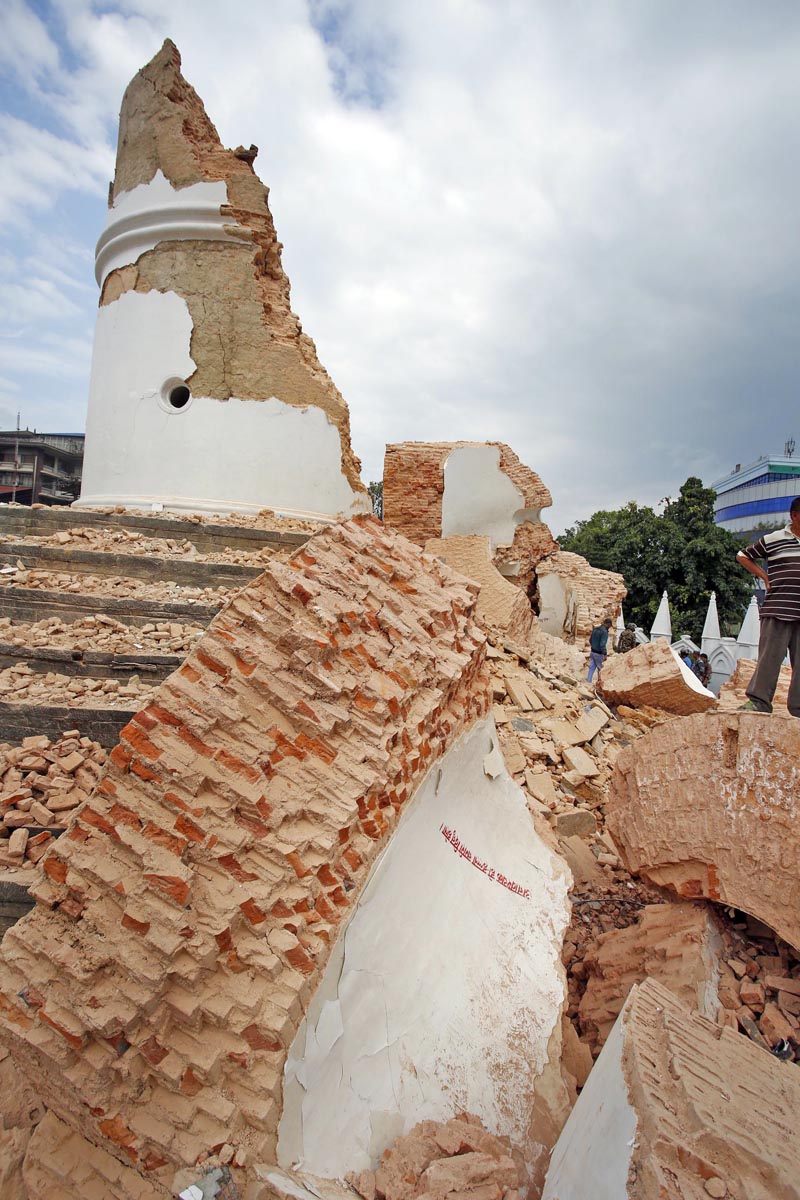 Ruins: Dharahara was one of the monuments that collapsed in the April 25 earthquake. Photo: THT/File
The resilient, diligent and highly elastic Nepali politicians and people may disdain sound advice, but if they had respected the findings of the study conducted by Kyoto University of Japan they could have mitigated the damage from the 7.8 April Quake “Valley houses may collapse  any time soon: Study” (THT, April 7, Page 8). The only saving grace is that 200,000 multi-storey buildings did not exactly kiss the ground but this should not delude us into thinking that this will not happen next time around. Desertification of Kathmandu, as warned by the six-year-long scientific study, may come true sooner than later if the government fails to stop further degradation of land. The Valley is already the top polluted place in Asia and third in the world. On the question of advice, during my last trip to Chautara about half a decade ago I expressed my humane concern to a few empowered residents of the dangers of tall buildings that had replaced quaint little houses on the slopes of a narrow, steep ridge. The retort I received was that their houses can withstand quake of 20-magnitude. I look forward to visiting Chautara and meeting those people if they are still alive. Meanwhile, Nepal government should accept with respect US envoy’s request to Oli to restore essential supplies. We are getting a little upset about not finding LPG in the market and the US envoy’s request could not have come at a better time. Manohar Shrestha, Kathmandu

I would like to draw your kind attention regarding the negative aspects of western values, democracies and dubious double standards of human rights. Where was the global conscience on human rights when atomic bombs were dropped in Japan by the US? Why was the same strategy not applied for Germany and Italy; that would have ended the war in Europe much earlier? Was it because that in spite of being enemies, Germany and Italy appealed to the pro-Europe American hearts more than their distant Asiatic Japanese enemies; that they decided to destroy an Asian civilization rather than touching their European relatives? The repeated plight for extra troops from UN by the tiny African nation, Rwanda, when a mass genocide was happening in the country was turned down in lieu of saving people in the European civil war in former Yugoslavian states like Bosnia, Croatia and others because they were the European brethren. Where are the human right advocates when countless lives are lost and millions of people are being displaced across the Middle East and North Africa; when a Russia-America war of dominance is ravaging the world fought carefully outside the boundaries of Europe and North America? Where was the plight of human rights activists when the defeated and retreating American ground troops in Vietnam committed gross atrocities and violent abuse of human rights against defenseless local rural women? Saikat Kumar Basu, Canada
#Human rights #April Quake #good advice #western values #pro-Europe American hearts #advice to government
You May Also like: