In Nepal, leaders are taken as budget holders, who are efficient in diverting the national resources to their constituencies. This has made policy makers an extra structure above the constitution in terms of distributing money 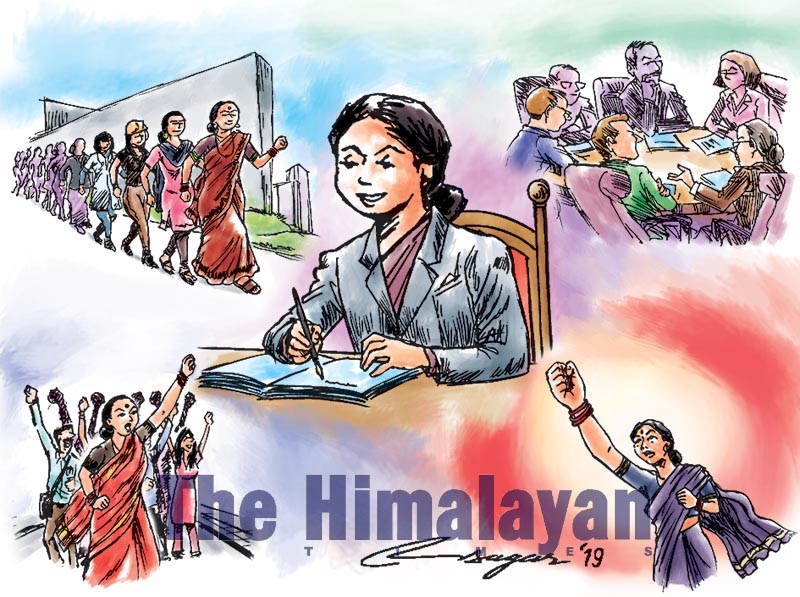 Illustration: Ratna Sagar Shrestha/THT
The 2017 local election was a landmark in terms of women’s representation in Nepal’s state structure. It guaranteed more than 40 per cent women’s representation in the local government. Unlike the previous experiences, the Local Election Act 2017 made it mandatory for the political parties to ensure 50% female candidates in the top two local level positions. Due to this provision, 47.67% of the top two positions in the 753 local governments were secured by female candidates. However, only 18 women were elected as the top local political executive, although 700 women were elected as vice-chairpersons or deputy mayors. Though only 2% top local positions were secured by female candidates in the last local election, the situation might improve in the next election if the elected women deputies prove their leadership capacity in the remaining three years. The Local Government Operation Act 2017 provides some distinct but very important responsibilities to the deputies along with general political responsibilities. Clause 16 (b) of the Act makes them the coordinator of the local judicial committee. Other responsibilities include coordination of programmes of non-government agencies and activities related to consumer welfare protection; monitoring, supervising and reporting the local government’s programmes and coordinating and facilitating the functions of different local committees. Clause (65) of the Act makes them the coordinator of the local revenue advisory committee meant to enhance the internal revenue sources. They are also members of the local resource estimation and budget ceiling determination committee. Deputies are also the head of the budget and programme formulation committee, coordinate and facilitate budgetary discussions in the thematic committees and prepare and submit a budget proposal to the executive committee of the concerned local government. Deputies are performing relatively well the judicial roles with government and non-government actors helping to enable them to better discharge this responsibility through capacity building and engagement exercises. The legal functions have obviously empowered them with enhanced communication and law interpretation skills. However this role has contributed less in promoting political exposure of deputies among the mass because the cases solved by the committees are primarily of a domestic nature. However, coordinating the activities of NGOs has been mostly limited to attending formal programmes. The local monitoring committee monitors or supervises projects implemented by local governments. The deputies should provide a formal report before making final payments to the contractors or user committees regarding construction projects. However, neither do they know the minimum technical aspects of the projects nor are they provided with technical support in doing so. In some cases, even if they see errors, they prepare a clean report because they feel that mentioning the facts in the report involves political risk. They seem sensitive that the ward level monitoring committee headed by chairpersons and the user committee headed by the political cadres would be unhappy if final payments are stopped or delayed due to qualified municipal monitoring reports. The consumer welfare protection committee headed by the deputies is expected to take the lead role in protecting the consumer from exploitation in price and quality. However, it neither has technical back-up at the local level nor do the local units of the national level quality control department coordinate with them. So the role of the local government in promoting quality of goods and services and consumer welfare has been in the shadow. The thematic committees of the municipal executive committee in many cases have not even conducted a single meeting. In Nepal, leaders are taken as budget holders, who are efficient in diverting the national resources to their constituencies. This has made policymakers an extra structure above the constitution in terms of distributing money in the form of constituency infrastructure development programme. On the other hand, deputies and vice chairpersons, being formal players, are behind the expectation regarding their role in budget and revenue processes. Revenue advisory committee meetings have not been conducted periodically to discuss the related issues including challenges of increasing local revenue sources, tax participation status and betterment of local revenue administration.The budget committee is not being efficient in running the core budgetary functions. Local governments are distributing a part of the local budget equally to the wards and the remaining chunk is distributed for projects. The deputies or vice chairs have no or insignificant role in prioritising the allocations both at the wards and municipal/rural municipal levels though they present the executive’s budget proposal to the local assembly. Once deputy mayors and vice chairpersons engage themselves in budgetary functions as mandated by law, contribute in bringing tangible changes in the existing ad-hoc practices of budget allocations, improve the internal revenue share in total budget and widen the other developmental and coordinating roles, they can prepare themselves as strong mayoral candidates.
#women’s representation #development politics #Local deputies
You May Also like: