By becoming the state party to the Montreal Convention, it would not only aid Nepal to reform and modernise the laws relating to air carriers’ liability, but also protect and promote the interests of consumers 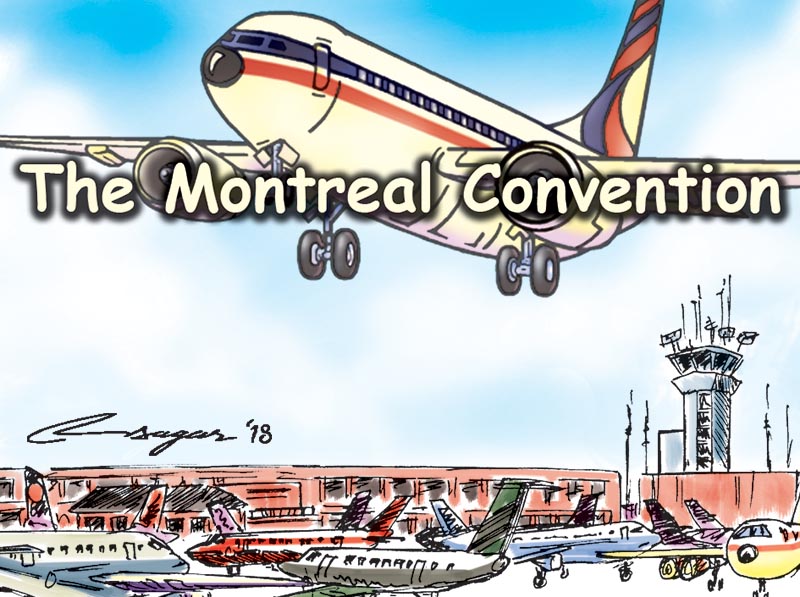 Illustration: Ratna Sagar Shrestha/THT
Nepal acceded to the Montreal Convention (formally, the Convention for the Unification of Certain Rules for International Carriage by Air) on August 24 this year. Earlier, Nepal was party to the Warsaw Convention 1929 and The Hague Protocol to the Warsaw Convention 1955, and after the accession, the Montreal Convention would now not only replace the outdated Warsaw Convention and its Protocol(s), but also modernise, unify and simplify the liability limits for commercial aircraft operators for damages in relation to the international carriage of passengers, baggage and cargo. Noting the fact that the convention entered into force on November 4, 2003, almost 15 years ago, and there are currently 132 state parties to the Convention, we may conclude that we were left behind in terms of adopting this modern international instrument governing the air carrier liability. Even in South Asia, India, the Maldives and Pakistan are parties to the convention, whereas Bangladesh is a signatory. Further, if we analyse the current state parties, we observe that most of those countries are focused on aviation and tourism business, as being a state party will help them to enhance their image in the aviation business and tourism. The incumbent government has made prosperity its top priority, and needless to say that after the operation of new international airports in the next few years and the fleet and destination expansion by our carrier, coupled with the ratification of the Montreal Convention, would encourage more airlines to land in and more tourists to come to Nepal, thereby boosting both businesses — aviation and tourism. After the accession, inconsistent provisions of Nepali laws will be void, and the provisions of the convention will be enforceable as goodly as Nepali municipal laws, thereby modernising the liability regime in Nepal. By virtue of the convention, first of all, the liabilities in case of deaths or injuries, baggage and cargo will be raised. In the case of deaths, the carrier’s limited liabilities will rise to 113,000 SDR (c. USD 160,000) from c. USD 24,000; in case of damage or loss of baggage the same would rise to 1,131 SDR (c. USD 1,600) from USD 20 per kg, and in case of loss or damage of the cargo the carrier’s liability would climb to 20 SDR (c. USD 27) per kg from c. USD 20, in case of loss or damage of the cargo — all of which are higher than the current liability amounts. In order to ensure certainties, these limits are expressed in Special Drawing Rights (SDR), an international currency established by the International Monetary Fund. The value of one SDR is calculated in reference to a selection of the major currencies in the world’s trading and financial systems. The Montreal Convention also provides that the review of these limits should be conducted every five years and must take into consideration the inflation factors. Therefore, adoption of SDR and revision mechanism ensures the certainty in timely and adequate compensation, even in future instances. Further, under the current Warsaw system, the plaintiff can file a lawsuit for compensation on four grounds — carrier’s principal place of business’, ‘domicile of the carrier’, ‘carrier’s place of business through which contract was made’ and ‘the place of destination’, whereas by ratifying the Montreal Convention, one more ground — ‘the principal and permanent residence of the passenger’ — would add up to the existing four grounds. Therefore, now onwards a Nepali victim or the representative of air crash victim could file a lawsuit for higher compensation under the convention, irrespective of other grounds. In addition, in the event of bodily injury, the convention will ensure advanced payment in order to cover immediate economic needs, apart from the modernisation of transport documents such as tickets. The convention will also oblige Nepal to ensure that its carriers maintain adequate insurance covering their liability under the convention. Several stakeholders seem to be sceptical in regard to the impact of the Montreal Convention on the domestic aviation industry. Concerns such as ‘Montreal Convention may impose unnecessary liability burden’ and ‘raise the insurance cost’, which will ultimately ‘raise the fare’, and also cause subsequent ‘loss to nation’s economy’, as majority of insurance amount is sent abroad to reinsurance companies and so on are often raised. However, such concerns are not much relevant as the Montreal Convention would not be applied in incidents related to domestic flights, because for domestic carriers operating in Nepal the compensation amount would be in accordance to the domestic law itself, and therefore, air carriers operating domestically will have to review and update their terms and conditions of carriage, only if a new domestic law to that effect is enforced. Since the current liabilities for incidents in domestic flights are strikingly low, this author is of the view that there is a need to revise the same and enhance the liability in case of domestic flights. By becoming the state party to the Montreal Convention, it would not only aid Nepal to reform and modernise the laws relating to air carriers’ liability, but also protect and promote the interests of consumers. It would also help our government to make Nepal a major travel destination by gaining credibility in the aviation sector. Chhetri is an advocate
#Montreal Convention #Warsaw Convention
You May Also like: