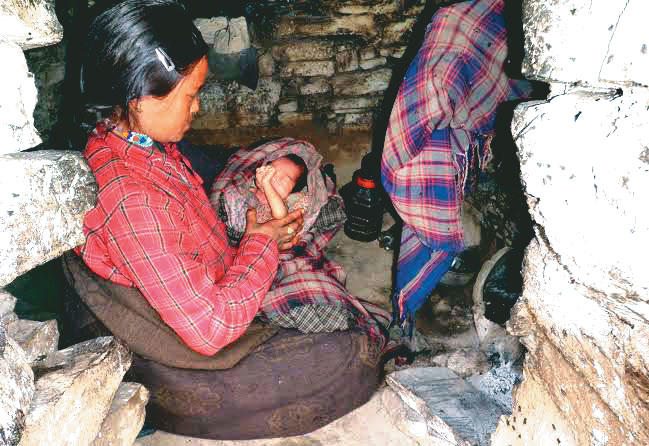 SEWAK Nepal, an NGO, deserves appreciation for organizing an awareness programme about the adverse effects of Chhaupadi at Badaipur of Bhimdatta Municipality in Kanchanpur district recently “Awareness drive against Chhaupadi” (THT, July 28, Page 6). Despite such efforts, this practice continues in various districts of the far-western development region due to deep rooted tradition and superstition in conservative societies. In fact, women need healthy and nutritious food and clean

environment during their periods. However, spending time in chhaupadi, all these facilities are normally barred making the women more vulnerable to ill-health. As reported in the past, some innocent women had even lost their lives while spending three horrible days and nights in chhaupadi during their menstruation period.

Education and awareness campaigns play an important role in completely uprooting this wrong practice from the minds of the local people.

For this, more aggressive non-formal education programmes and awareness campaigns are to be systematically planned and implemented to bring about positive changes among the local people about this ill-practice. In addition, implementation of women empowerment programme mobilizing women group members can also be an affective way to chase away this bad practice.

Nepali culture, traditions, and religions should be protected by the people themselves. It is the culture, traditions and religion that make the identity of a country. A majority of the people are Hindus in Nepal. So, Nepal should remain a Hindu Republic while giving equal space to other people who have different faiths and religions. The new constitution should not discriminate against anyone else based on their religion and faith, caste and creed, and they must get equal opportunity to take part in the nation-building process, education, job and other services to be offered by the state. If many Muslim countries can remain Islamic states why cannot Nepal remain a Hindu state as long as the state treats other religious communities equally? After the CA Committee on Citizen Relations and Public Opinion Collection found that people were against the term ‘secular’ the leaders of the major political parties who struck the 16-point deal have realized that the term should be replaced with ‘religious freedom’, or they are considering the option of not mentioning anything about religion in the constitution.

Even if nothing is mentioned in the new constitution about religions or ‘religious freedom’ a law should be enforced to discourage conversion which is on the rise in the rural areas because of poverty, illiteracy and lack of awareness about the fallout of the conversion.