Venezuelan crisis: Of what concern to Nepal?

Whether it was correct or not to release the press statement by the ruling party leadership before the government made an official statement is open to debate, but the diplomatic decorum has been challenged 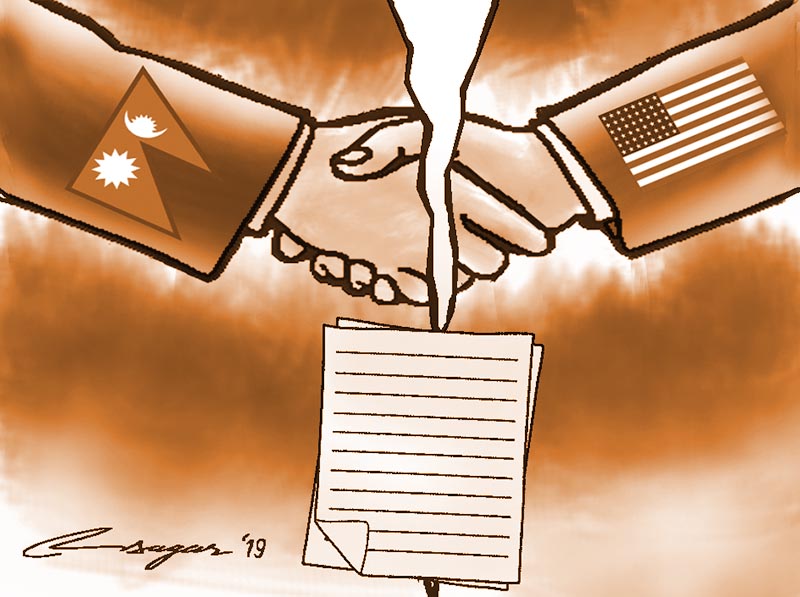 Illustration: Ratna Sagar Shrestha/THT
Nepal has had bilateral relations with Venezuela since April 28, 1987, and the two share many common concerns on international issues. Presently, the relations have found space in the national media because of the Venezuelan crisis and the Nepal Communist Party’s press statement against the US Government that favours Juan Guaido, who is said to have lost the 2018 election to Nicolas Maduro. The election is said to have been rigged and has been denounced by countries like Argentina, Chile, Colombia, Brazil, Canada and the United States. On the contrary, countries like Cuba, China, Russia, Turkey and Iran back Maduro as the elected president. It is obvious that there are two blocs   - one led by the US and the other jointly by Russia and China. The Nepal Communist Party (NCP) released a press statement denouncing threats by the US and its allies to intervene in the internal affairs of Venezuela. The statement in favour of Nicolas Maduro was released at a time when the country’s Prime Minister KP Sharma Oli was in Davos for the World Economic Forum. Why the NCP was in such a hurry to release the statement needs some elaboration. Maduro became the president after the death of Hugo Chavez, who founded the left-wing socialist movement, in 2013 by a shortened election despite the demand for a recount and claims of manipulation by his competitors. Thus Venezuela has seen turbulence in terms of political stability. Quite a large number of human rights violations have been reported by the media. During the 73rd UN General Assembly in September 2018, Argentina, Canada, Chile, Colombia, Paraguay and Peru had filed a joint claim with the International Criminal Court in the Hague asking it to investigate Venezuela for suspected crimes against humanity. As a result, the Human Rights Council adopted a resolution on Venezuela for the first time expressing concern over the issue NCP co-chair Puspa Kamal Dahal appears to have hurried to release a press statement in favour of President Maduro as it feared a similar incident could happen against the NCP-led government in Nepal. Speculations are rife that the US desire to see Nepal as a part of its ‘Indo-Pacific’ strategy could have been ‘negatively perceived’ by China and might have advised the NCP leaders to re-act accordingly. The other reason could be the turbulent ‘transitional justice mechanism’ - a hard nut to crack for Dahal and his party. The case that Venezuelan President Maduro is likely to face, should the United Nations activate the International Criminal Court against him, may also be directed towards Nepal. The way the European Union countries and the United Nations have released a press statement about the progress of ‘transitional justice’ looks like they have taken the case quite seriously. In response, Prime Minister KP Sharma Oli has said the case has already been solved at the government level and appealed to the international community not to escalate the issue further. But the victims, rights activists and the international community have refused to accept the contents of the bill presented in the House to grant amnesty to the oppressors. In fact, the Government of Nepal has taken a soft approach to manage the ‘transitional justice’ through reparation and compensation. But it has failed to understand that amnesty cannot be granted to those who have used excessive force to kill innocents. The government advocating the Columbian model to appease the victims through reparation may not work for lack of funds, which must come from the pocket of the Nepali taxpayer. These are believed to be the reasons behind the hasty statement by the NCP co-chair in the absence of another co-chair and Prime Minister KP Sharma Oli. Against the strongly worded statement, the US government had appartently asked the Nepali government to clarify its position on the issue. Dahal had strongly denounced American intervention in the internal affairs as an attempt of an “imperialist coup”. The statement by Dahal has put the Nepal government in a very awkward position in front of many other development partners, including the US with whom Nepal has had ties since 1947. In its bid to clarify its position as requested by the US government, the Ministry of Foreign Affairs (MoFA) has revealed an almost similar statement as it “believes the internal political problems of a country need to be resolved within its constitutional parameters in a democratic manner, free from external interferences”. The language is comparatively soft, but the message it carries is almost the same. To conclude, whether it was correct or not to release the press statement by the ruling party leadership before the government made an official statement is open to debate, but the diplomatic decorum has been challenged. The intent of this wrangling could be any, and Nepal could become a playground for international politics. What is this power game and who benefits from this entire plot? All the mainstream political parties and its leaders must be careful as to how, when and where they could be misused by such mindful elements in the future. The author is an ex-Brigadier General, a PhD in Conflict Management and a scholar of Security and Strategy Studies
#Nepal #Venezuela #Nepal Communist Party #Nicolas Maduro #Nepal Communist Party (NCP) #Venezuelan crisis #diplomatic decorum
You May Also like: