A simple reality must be kept in mind: The European integration project that began in the wake of World War II has helped to bring unprecedented stability and prosperity to much of the continent for nearly three-quarters of a century. A British decision to sue for divorce would add to centrifugal forces already in evidence 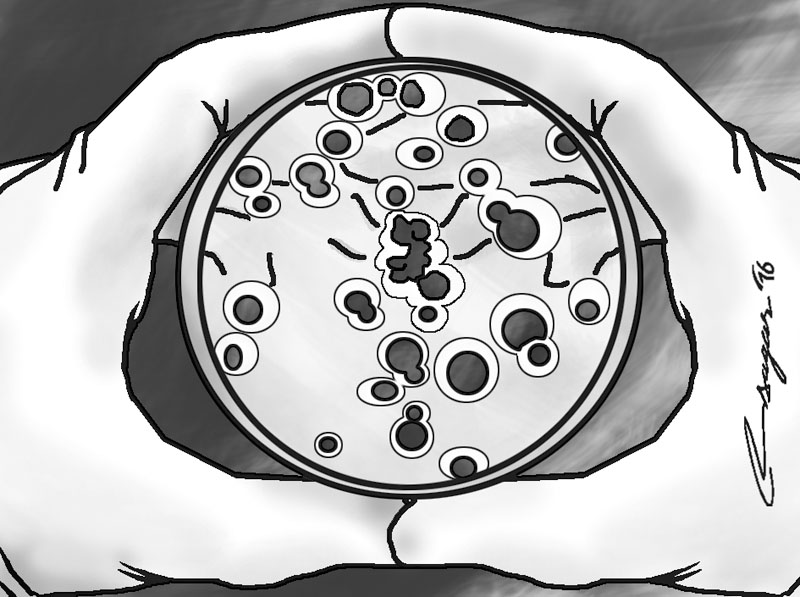 Bacteria. Illustration: Ratna Sagar Shrestha/THT
The decision whether to remain part of the European Union is obviously one for the British people and their elected representatives to make. But more than British and European interests will be affected by the outcome, so it is both legitimate and appropriate for other parties to weigh in. So let me exercise my right as an outsider with a stake in what happens to express a clear opinion: From my perspective (and that of many other Americans), a decision by the United Kingdom to exit the EU would be undesirable – indeed, highly undesirable. I am aware of the irony some are sure to note in this, given that the United States’ own independence came about when the American colonies exited Great Britain. But that was then, and this is now, and the UK’s exit from Europe would be greeted with equal parts regret and concern by its closest ally. There are several reasons for this. One reason why the US values its ties to the UK as much as it does is the UK’s role in Europe. Britain is important not just as a bilateral partner, but because more often than not it can be counted on to argue for and support positions in Brussels consistent with, or at least not far from, those of the US. The so-called “special relationship” has already become considerably less so in recent years, with Parliament’s refusal until December to support military action in Syria taking a particularly heavy toll in this regard. Britain has become – and is widely perceived to be – a less dependable and less capable ally, and reality and perception would intensify if the UK were to take a step that would marginalize its role on the continent. It is hard to envision Brexit resulting in anything other than a more parochial and less influential UK. Addition, an EU without the UK would be one in which Germany would have even more influence that it does now. Such a preponderance of power cannot be healthy in the long run, as it will fuel resentment of Germany and likely leave the EU less willing and able to act together on the world scene. The result would be a weaker Europe at a time when the US needs a stronger one. Even worse, it is highly probable that Americans advocating for a reduced US role in the world would seize on Brexit as further evidence that traditional allies were not doing their fair share, and that a US facing growing deficits and massive domestic needs should not be expected to make up the difference. A simple reality must be kept in mind: The European integration project that began in the wake of World War II has helped to bring unprecedented stability and prosperity to much of the continent for nearly three-quarters of a century. A British decision to sue for divorce would add to centrifugal forces already in evidence. Nationalism and populism, already on the rise for both economic and social reasons, would gather even more momentum. It is difficult to feel confident of the outcome, however uncertain that may be. A decision by the British people to leave the EU would also put the question of Scotland’s independence squarely back on the agenda. Indeed, many in Scotland would argue for independence in order to remain an EU member – a popular refrain that could well result in a vote to secede from the UK. To say the least, Americans would not welcome a difficult, controversial public debate with Scotland’s leaders over the stationing of nuclear weapons and submarines on their territory at a time when Russia is again seen as a threat to Europe. Fragmentation would be unlikely to stop there. What happened in Scotland could well have ripple effects across what remained of the disunited United Kingdom. In particular, Great Britain’s departure from the EU and Scotland’s departure from the UK would add to tensions in Northern Ireland between pro-UK Unionists and Republicans seeking to join Ireland. Raising the profile of “final status” issues at a time when the two sides have shown themselves unable to face up to the past, or work together in the present, is not a recipe for progress. Finally, Great Britain’s decision about its relationship with the EU will not happen in a vacuum. In fact, the timing could hardly be worse. Europe is already facing a perfect storm of fiscal strains, anemic economic growth, massive inflows of migrants and refugees, and renewed Russian aggression. As if that weren’t enough, there is the unraveling Middle East, advancing climate change, terrorism, and now a new disease – the Zika virus – on the march. There will also be a new US president elected this year. The last thing he or she will need is to have America’s closest partner distracted and drained by a difficult divorce. And that is what will happen if Brexit moves from possibility to reality. Haass, President of the Council on Foreign Relations, was a US envoy to the Northern Ireland peace negotiations © Project Syndicate
#britain #European Union (EU). #European integration project
You May Also like: