If all productive manpower, given a chance, is going abroad to work or to study with a hidden motive to settle down, who will stay here? The fear of our country turning into an elderly asylum may not be, hence, a far-fetched idea anymore 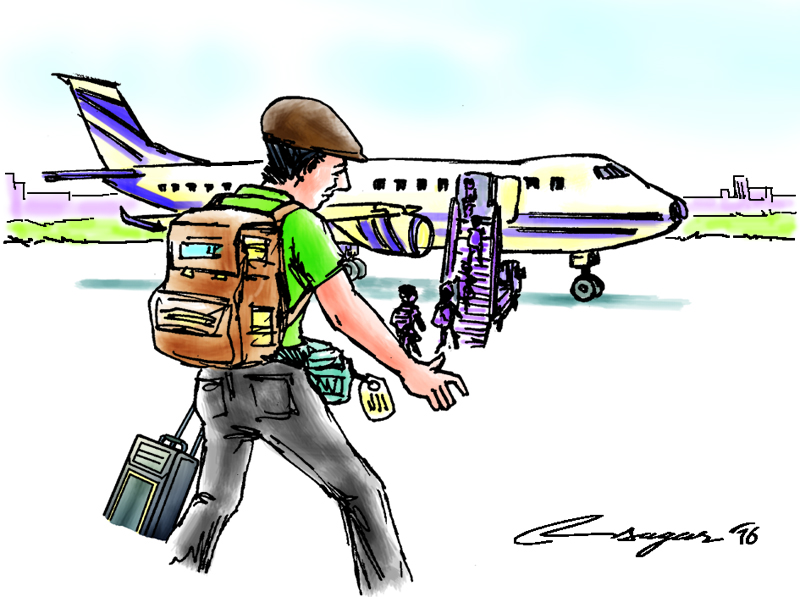 Data suggest that the Ministry of Education had issued over 29, 000 no objection certificates in the fiscal year 2014-15 alone. An estimate has it that about 80% of those receiving the certificates would go abroad for further studies. While studying the trend, this fiscal year marks a record high number of the issuances increasing each consecutive year. The top three study destinations for the Nepalese youths constitute Japan, Australia and USA. Seeing the number of youngsters cramming in the preparatory institutions and the candidates taking appointments for the standardized tests months before clearly indicate that the craze of going abroad with a student visa, which has been found to be relatively easier than others, is ever on the rise. Similarly, labour migration is also increasing alarmingly. The labour permits issued in the fiscal year 2013-14 exceeded 520,000; the number definitely increases as the years pass. Current statistics suggest more than 25% of the total national economy is contributed by remittances. There is not even a single household in the city area, irrespective of where, where at least one of the family members has not gone abroad apparently in the name of further studies. By contrast, most of the rural households have at least one family member working abroad. The contemporary youth mindset is, thus, if you are eligible to study abroad, you will apply for a student visa and fly; and if you are not, you apply for a working visa to the Gulf or Malaysia and fly. Either way, leaving the motherland is the ultimate goal. Life is not always a race, and we should walk at our own pace with our own preset goal. For that, one does not have to go to a foreign land. One who wishes to live in his/her own country is not disabled or crippled. But these things are not explicitly comprehended by a cash loving society like ours. For example, let us imagine you are a relatively settled professional with an ‘acceptable-standard’ lifestyle here, and there is this another mediocre guy of your recognition, say a high school friend, who went abroad years back after not-so-good academic records, now flicks literally a sack of dollars to his family. Your father would boast about his son’s prowess. Nothing is known about the work he does in illegal hours with the student visa. When they make a momentary return to the country there are onlookers who will look at them like wretched guys struggling only to make ends meet. In comparison your service to society where you were born, and your unique contribution to render the national economy stay afloat is never brought to the forefront. Where there is money, there is greatness. When all the people around you are playing the endless chain of imitation game—of mimicking others’ footsteps to earn money and presume it a success, you will surely be left alone in despair only to share the bleak prospect of staying and serving your own nation. And that’s when everything makes you stay online till the wee hours lurking around websites to seek opportunities abroad. Your face will be among many familiar faces that regularly visit consultancies, which apparently guarantee you fly overseas. These days it seems everything about abroad is charming, but unattractive here. An example of this can be found in the names of today’s boarding schools. Is not it the destitute mentality of parents who compete to admit their children to a school whose name is an international brand? There is no affiliation at all to the international institute but there is this charming English name taken from a place in California or wholly copied from a renowned college somewhere in the another part of the world. Generally, these are the schools which have students over quota. Moreover, starting from the kindergarten education, the schools do not care about the Nepali language. These toddlers are taught to speak English, walk and eat like the English, behave and do everything like the English; so much so that the Nepali language is, oftentimes, strictly prohibited giving a superficial impression to the children that it is a crime to embrace one’s mother tongue. At the primary level there is hardly a book in Nepali, and parents bask in pride when their children speak like native Americans. So, from the start of formal education to the university, the education offering institutions have been developed to be the production houses of ‘export quality’ human resources. Many only want to fly somewhere far and disappear forever rather than work or seek work here. Youths, who have gone there to acclimatize to the new culture, wish to settle their family there. When they make vocational home visits—which are scarce, of course—they cope very hard to adapt in their own system, pollution and whatnot. Weeks lengthen like a year and shortly after that their duration of stay shortens with a good excuse. That means the ‘diaspora’ will be a very common population phenomenon generation after generation, if we can’t rule out the underlying causes. If all productive manpower, given a chance, is going abroad to work or to study with a hidden motive to settle down, who will stay here? The fear of our country turning into an elderly asylum may not be, hence, a far-fetched idea anymore. The author is the consultant optometrist of Reiyukai Eye Hospital, Banepa.
#foreign employment #Ministry of Education #Remittance #Immigration
You May Also like: