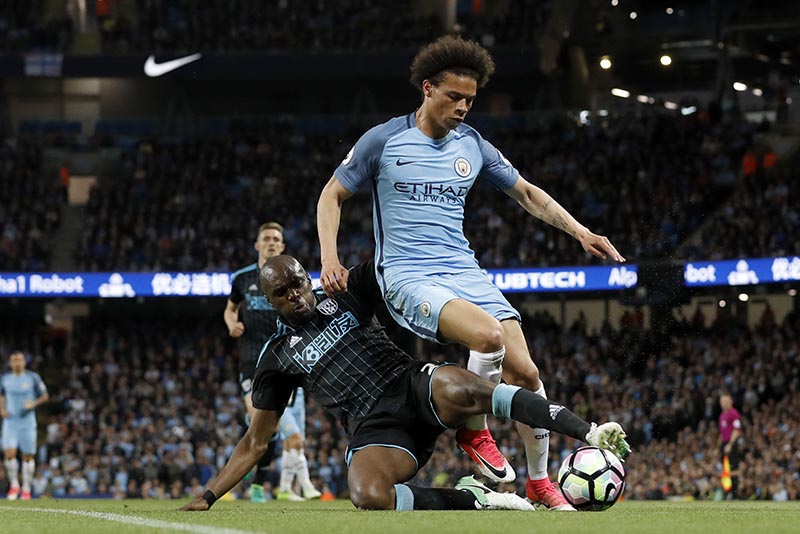 MANCHESTER: With one weekend left in the English Premier League, the stage is set for a three-way race for the final two Champions League qualification spots.

Manchester City should be guaranteed one. Arsenal — for the first time in 20 years — is the favorite to miss out.

Both teams won home games on Tuesday — City beat West Bromwich Albion 3-1 and Arsenal defeated Sunderland 2-0 — to leave them separated by three points heading into the final round of games. Liverpool is the other team in the hunt.

Crucially, City has a superior goal difference of 6 and has a benign-looking game, on paper, away to Watford. With Liverpool at home to already-relegated Middlesbrough, Arsenal can only beat Everton and hope for the best.

If Arsenal misses out, it will be the first time the club has done so in a full season under manager Arsene Wenger. Wenger's latest contract is up at the end of this season, and failing to reach the Champions League could yet sway his decision about whether to stay on.

On an almost perfect night for City, popular defender Pablo Zabaleta got a rousing send-off in his last home match. Yaya Toure scored perhaps a farewell goal for the club, and the team virtually guaranteed a place in the Champions League.

Gabriel Jesus and Kevin De Bruyne scored first-half goals, before Toure strolled through West Brom's defence to add the third and bring the home fans at Etihad Stadium to their feet. Toure, who has been at City since 2010, is waiting to discover if he will receive a new contract.

It has already been confirmed that Zabaleta — one of City's most popular players — will be leaving City after nine years, and he came on for the final half hour. Each touch, tackle and foul was applauded and there were tributes, a video montage and a presentation after the game.

Alexis Sanchez kept Arsenal's hopes of qualifying for the Champions League alive after scoring twice in the final 18 minutes.

Sanchez, who took his tally for the season to 28 in all competitions, was left unmarked to meet Mesut Ozil's cross and he doubled the lead with a header after Olivier Giroud's volley rebounded out.

Arsenal could still end the season with silverware by beating Chelsea in the FA Cup final, but missing out on the Champions League would be a big blow to Wenger and his chances of both keeping Sanchez and recruiting big-name players.

Reading beat Fulham 1-0 to win 2-1 on aggregate and reach the League Championship playoff.

Huddersfield or Sheffield Wednesday await in the final at Wembley Stadium on May 29.