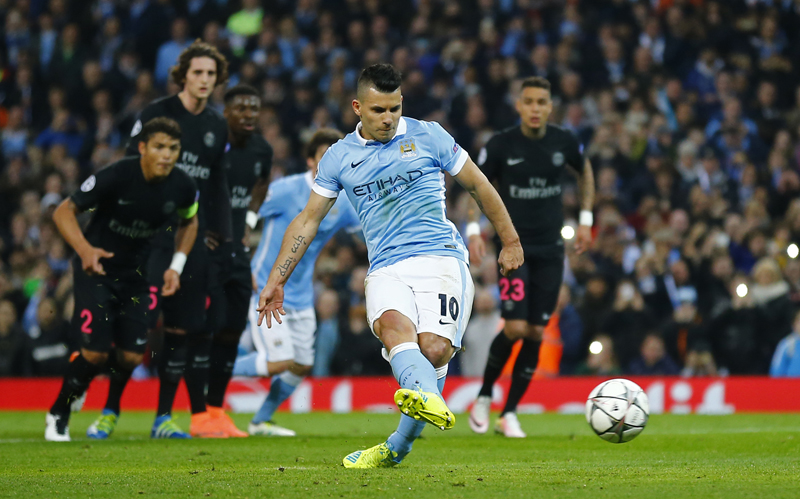 Manchester City's Sergio Aguero misses a penalty against PSG during UEFA Champions League game at Etihad Stadium in Manchester on Tuesday, April 12, 2016. Photo: Reuters
MANCHESTER: Manchester City's spine of goalkeeper Joe Hart, center back Vincent Kompany, midfielder Yaya Toure and striker Sergio Aguero has anchored the team since 2011 in the most decorated period in its history. One by one, it is being dismantled by Pep Guardiola. Hart has been sent out on loan to Italy. The injury-hampered Kompany no longer appears first choice. Toure has been ostracized. And the seemingly unthinkable is happening: Aguero is coming under pressure for his place. Aguero started on the bench for the English Premier League game against Everton on Saturday after playing two matches for Argentina during the international break. More surprisingly, he stayed among the substitutes for the Champions League match at Barcelona on Wednesday, when Guardiola preferred to play midfielder Kevin De Bruyne up front. Aguero has been untouchable, a guaranteed starter since joining from Atletico Madrid in July 2011. Suddenly, possibly the most popular player among City fans and a scorer of 102 league goals in his first five seasons at the club is vulnerable and seemingly dispensable, even if he is likely to regain his place for the Premier League match against Southampton on Sunday. When asked if Aguero was being phased out, Guardiola said on Friday the player's future was at City. "When Sergio decides to leave Manchester City, it will be his decision," Guardiola said. Then, echoing comments he made about Hart in August before allowing him to leave, Guardiola added: "I appreciate him (as) a football player. I appreciate (as) a man what he did here." It's not just the recent selection decisions that hint at a sense of unease between Guardiola and Aguero. Guardiola has said publicly on at least two occasions this season that he wants more from Aguero than just goals, just like he wanted more from Hart than simply making saves. After Aguero's hat trick in the Champions League win over Borussia Moenchengladbach, Guardiola said: "I cannot teach him (about his talent in the penalty box) but he has to know that behind, the rest of the team wants to help him and that is what I want to convince him." While on international duty with Argentina this month, Aguero was quoted as telling Argentine media that Guardiola "is very picky about everything, (and) it's good. "The good thing is that I'm getting used to him and automatically going straight into pressing the centre backs." Aguero, who is contracted to City until 2020, has 11 goals in 10 appearances this season, and 19 in his last 20 dating to last season. There are few better, attainable strikers around and it will be intriguing to see how the situation pans out, especially with Brazil forward Gabriel Jesus due to arrive in December to provide competition up front. Guardiola said on Friday he had no regrets about his decision to drop Aguero for the Barcelona game, which City lost 4-0 after having goalkeeper Claudio Bravo red-carded. That made it four games without a win for Guardiola, and a failure to beat Southampton would equal the longest streak without a victory in his coaching career. In an answer that lasted more than 6 1/2 minutes on Friday, he defended his tactics at Camp Nou and praised the personality of his young players like John Stones and De Bruyne. Guardiola repeated he will not change his style. "I think about that, yes," he said. "But after that, the solution is not better than what I believe. So I cannot. Do you know why as well? Because in seven years (at Barcelona and Bayern Munich), I won 21 titles. ... So it's three titles per year playing in that way. "No, no, I'm not going to change. First, it's going to happen that (if) it's not going well in the future, next season isn't going well in that way, I will go home."
#Manchester City #Vincent Kompany #Joe Hart #Pep Guardiola #Yaya Toure #Sergio Aguero
You May Also like: