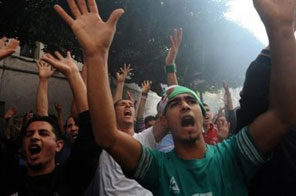 Football fans in Algiers chant as they wait to buy tickets to see their national squad take on Egypt Source: AFP

ALGIERS: Thousands of Algerians held a spontaneous rally Sunday in the capital Algiers in support of their national football team, which degenerated into attacks on Egyptian businesses.

The rally in central Algiers began with fans chanting "One, two, three, Go Algeria!" as they thronged Air Algeria's city-centre offices trying to get tickets to travel to Sudan for the second leg World Cup football qualifying match against Egypt in Khartoum on Wednesday.

But it later descended into violence when fans broke through the metal shutters to smash the window and ransack the offices of Egypt Air, an AFP journalist said.

The offices of mobile telephone company Djeezy, part of the Egyptian telecommunications group Orascom, was also ransacked, the website of the El Watan daily reported.

The company also said one of its employees was assaulted at Algiers airport.

Twenty Algerians were injured in clashes in and around Cairo after Saturday's first round match, according to Egyptian police, which Egypt won 2-0 to keep alive its hopes to travel to South Africa next year.

Egyptian and Algerian fans have a long history of violence.

#Algeria football fans ransack Egyptian businesses
You May Also like: