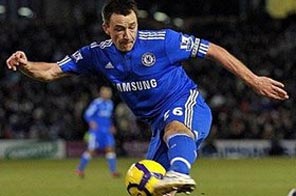 Chelsea's English defender John Terry shoots during their English Premier League football match against Burnley at Turf Moor in Burnley. Terry ensured he would make headlines on both the front and back pages after his late winner sealed a 2-1 win at Burnley that extended Chelsea's Premier League lead to four points. Source: AFP

BURNLEY: Chelsea boss Carlo Ancelotti said John Terry would remain the Premier League leaders' captain after the England star shrugged off controversy over his private life to score the winner against Burnley.

Terry's header eight minutes from time secured a 2-1 victory at Turf Moor that extended Chelsea's lead at the top of the table to four points and came despite the unwanted probing into his private life before Saturday's game.

Ancelotti insisted he had no hesitation in fielding Terry despite the married father of two facing calls to be stripped of the England captaincy after allegations of an affair with the ex-girlfriend of his former Chelsea team-mate Wayne Bridge.

The Italian was quick to back the central defender, insisting: "He played fantastically and I never thought about not playing him but I don't want to talk about his personal life.

"He's doing very well at his job and I'm not worried about him," Ancelotti added after a match where Nicolas Anelka's early goal was cancelled out by an equaliser from Steven Fletcher before Terry headed in Frank Lampard's corner.

"I think John Terry's professionalism has improved the image of the club. He's a fantastic professional and is focused on his work."

And as to the growing calls for compatriot Fabio Capello to replace Terry as England captain ahead of this year's World Cup in South Africa, Ancelotti said: "England is not my team. I'm the Chelsea coach and won't speak about what happens to the England team.

Meanwhile, Lampard said Chelsea had answered the critics who claimed their title hopes would be derailed by the Africa Cup of Nations.

The Blues welcome back Didier Drogba and Salomon Kalou for Tuesday's trip to Hull City, where Chelsea will look to stretch their advantage over rivals Manchester United and Arsenal by extending their 11-game unbeaten run.

Chelsea, who've won their last six matches, have coped admirably without 19-goal top scorer Drogba and the influential Kalou, who've not figured in the Premier League since December 28.

The Ivory Coast duo were both rested at the weekend to give them extra time to recuperate after their journey back from Angola.

Ancelotti will also soon have Nigeria's John Mikel Obi to call on, although he will be without Michael Essien for up to six weeks after the Ghana midfielder sustained a knee injury on international duty.

In the quartet's absence, Lampard said Chelsea had proved their strength in depth while bidding to end Manchester United's three-year Premier League stranglehold and bring the title back to Stamford Bridge for the first time since 2006.

"A lot of people spoke out about the Africa Cup of Nations and said we might struggle because of losing players to it, but we never believed that," England midfielder Lampard said. "We've done well.

"We now move onto Hull. It's not bad to be able to bring back players of the calibre of Didier and Salomon, is it? We're delighted to have them back.

"We're on a good run at the moment. It's important to keep that going and we had to show a lot of grit to beat Burnley. We're happy to be top because it means we only have to worry about ourselves, and no-one else."

Burnley are without a league win for three months and face a fight to avoid an immediate return to the second-tier Championship.

They remain in the bottom three with new manager Brian Laws still searching for a first win in charge.

"The disappointment is that we were only five or six minutes away from taking a point, but we take a lot of positives," Laws said.

#Ancelotti puts trust in Terry
You May Also like: