ANFA did not help me: Anil 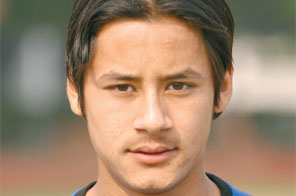 KATHMANDU: Nepali national football team’s influential striker Anil Gurung, who had gone to UK to try his luck in the English football, blamed the negative attitude of All Nepal Football Association (ANFA) robbed him the chance to play in England.
Anil had gone to London to give a trial to the Walking
Club with a dream of playing with the English Premier League leaders Chelsea some three months earlier. He played a couple of pr-season matches with the Woking Club and the club had liked him. But unfortunately, Anil could not stay back in London as he could not acquire the work permit visa there.
Anil, who went to London on visit visa, needed working visa to stay there. At a press meet organised by Nepal Sports Journalists Forum, Kaski branch, Anil blamed the ANFA of not providing the ‘No Objection Letter’, which was required to apply for the work permit. Anil had no choice to leave his dreams midway and return home.
“There were lots of opportunities for me. Not only Chelsea, I could have applied with other clubs as well. But I had to return as I did not have sufficient documents and the ANFA also did not provide me with the No Objection Letter,” Anil told reporters. Sahara Football Club of UK had managed Anil’s trip to London and the trial at the Woking Club.
However, the striker said he would apply the techniques
he learnt there in Nepali
football. “We have lots of things to learn from English football and we have to do a lot of hard work,” said the striker. “I found the footballers there focused on fitness and I will also do the same now,” added Anil.

#ANFA did not help me: Anil
You May Also like: