Kathmandu, June 22 Nepal APF Club defeated Gorkha Boys Rupandehi 1-0 in the final of the sixth Rumpum Udaypur Gold Cup here today. Shyam Nepali scored the solitary goal of the match in the second half. After a goalless first half, Nepali broke the deadlock in the 76th minute with a powerful strike from 60 yards out. Both the teams created ample scoring opportunities but no team was able to convert those chances except for Nepali’s strike. 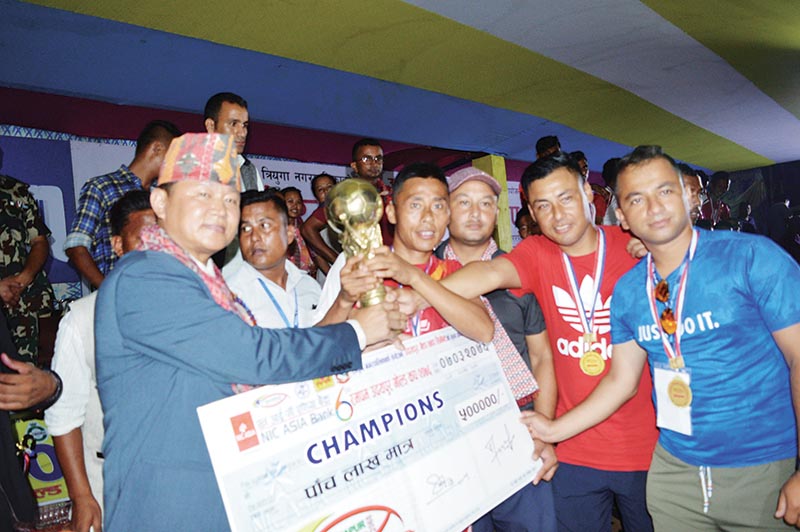 Photo: THT
With the trophy, APF got Rs 500,000, while Gorkha Boys received Rs 300,000. APF’s Rajendra Rawal was declared the best player and he earned Rs 50,000, while the goal scorer of the final, Nepali was named the man of the match and he got Rs 7,000. Nabin Lama of APF was the best striker of the tournament, while Sudip Shrestha, also from APF, was named the best coach. Gorkha Boys’ Pepe was the best defender and his teammates Fofana and Nitin Thapa were the highest scorer and best midfielder respectively. Sudip Shrestha was declared the emerging player. The individual award winners got Rs 15,000 each. Chief Minister of Province-1 Sherdhan Rai handed over the prizes to the winners.
#Nepal APF Club #Udaypur Gold Cup
You May Also like: