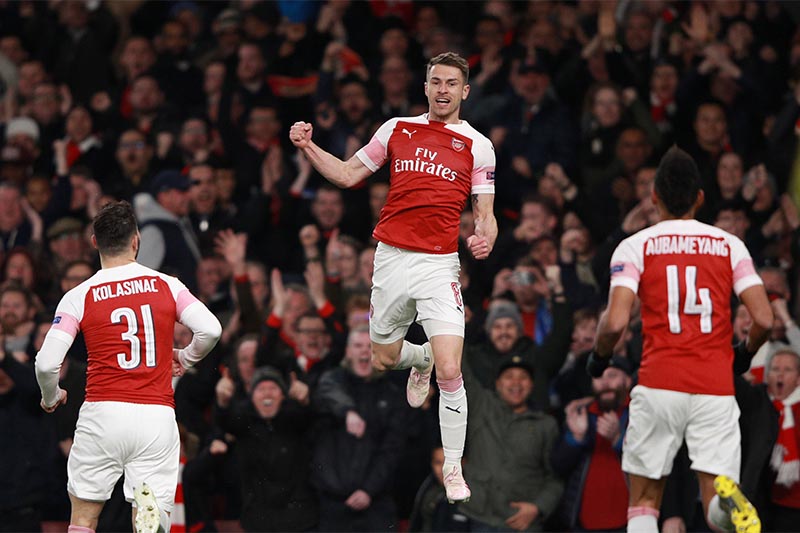 Arsenal's Aaron Ramsey celebrates scoring their first goal with Sead Kolasinac and Pierre-Emerick Aubameyang during the Europa League Quarter Final First Leg, on Arsenal and Napoli, at Emirates Stadium, in London, Britain , on April 11, 2019. Photo: Reuters
LONDON: An Aaron Ramsey strike and a Kalidou Koulibaly own goal gave Arsenal a 2-0 victory over Napoli in the first leg of their Europa League quarter-final on Thursday - and a rare and valuable clean sheet to take to Italy in a week's time. Arsenal took the lead in the 14th minute through Ramsey, who finished off a sweeping move down the right by calmly slotting the ball past Napoli goalkeeper Alex Meret. They doubled the advantage 10 minutes later after a moment of individual brilliance from Lucas Torreira, who dashed through the Napoli midfield before spinning and switching the ball to his left foot and letting fly. The Uruguayan's shot took a heavy deflection off Senegal defender Koulibaly and was registered as an own-goal. "We can be happy with this result, but (Napoli) are going to be more competitive away. Our challenge - our success - is going to be if we can be competitive away," Arsenal manager Unai Emery told reporters, repeatedly describing the tie as "50:50". The Gunners tried to increase their advantage as the first half wore on but they failed to capitalise despite several shots on goal from strikers Alexandre Lacazette and Pierre-Emerick Aubameyang, while Napoli had Meret to thank for numerous saves. Carlo Ancelotti's men poured forward at the start of the second half in search of an away goal, with striker Lorenzo Insigne's effort ruled offside and Koulibaly denied moments later when keeper Petr Cech tipped his header over the bar. ARSENAL CHANCES The game quickly opened up and Ramsey, who will join Napoli's rivals and Serie A leaders Juventus in the close season, and Nacho Monreal created chances at the other end but were unable to outwit Meret again. Napoli went closest to scoring when Insigne raced down the right and crossed to Piotr Zielinski, but the Pole's right-foot effort shot up over the bar. "We had our chances and wasted them. We know we didn’t have a good game. Now we have to think about the return leg," Insigne told Sky Sports. "The away goal would have been vital. We have to stay focused, learn from our mistakes and have more courage next week," he said. The Italian side have now failed to beat English opponents away from their San Paolo stadium in nine attempts in European competition, and will need to find some scoring form at home if they are to progress in the competition. "I think the second half gave us some idea how we can play the second game," Ancelotti told reporters, suggesting his side had more of the run of play as Arsenal's players tired, a number of them pulling up with cramp as the game neared the end.
#Arsenal #Europa league #Aaron Ramsey #Napoli #Kalidou Koulibaly
You May Also like: