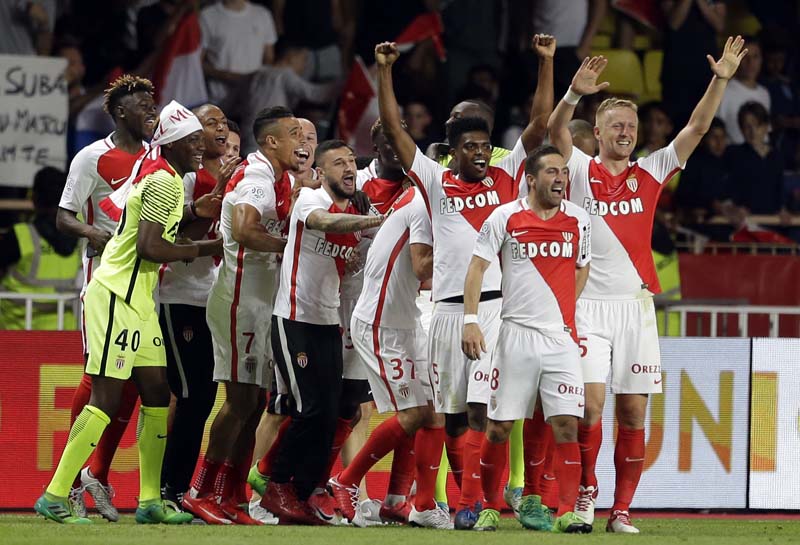 Monaco players celebrate their goal during the League One soccer match Monaco against Saint Etienne, at the Louis II stadium in Monaco, on Wednesday, May 17, 2017. Photo : AP
PARIS: On the night Monaco clinched its first French league title for 17 years, it was fitting that rising star Kylian Mbappe scored a superb goal. The teenager, who has taken just six months to become one of Europe's most sought-after players, scored the opener in a 2-0 win over Saint-Etienne on Wednesday. Mbappe scored his 15th league goal this season with his first chance of the game after Saint-Etienne midfielder Jordan Veretout gave the ball away near the halfway line. The 18-year-old striker was set up by Falcao's through ball and rounded goalkeeper Stephane Ruffier with a feigned shot at full speed before finishing from a tight angle. Substitute Valere Germain completed the win in added time. With one match left to play this weekend, Monaco has an unassailable six-point lead over second-place Paris Saint-Germain, the defending champions. Despite losing to Juventus in the Champions League semifinals, Monaco has thrilled Europe with its attacking football, scoring 155 goals in all competitions and reaching 104 in the league, two more than PSG's league tally last year. Only RC Paris (118) and Stade de Reims (109) have scored more, during the 1959-60 season. Led by the strike duo of Radamel Falcao and Mbappe, Monaco averaged nearly three goals per game this season to end PSG's four-year dominance. Unbeaten in the league in 2017, Monaco has also scored in its last 31 league games, a new record during a single season. "Monaco waited 17 years for this title, this is exceptional, a true source of pride," Monaco vice-president Vadim Vasilyev said. "We played in the second division four years ago. I did not believe we would achieve this in such a short period. We will do everything we can to keep our players." Keeping Mbappe in the Principality might be a tall order, though. The youngest player in French league history to reach 10 goals in a season, he has scored 26 goals in all competitions, won a place in the France team and been named as the French league's best young player. He is reportedly courted by both Real Madrid and Manchester United. On Wednesday, Monaco lacked its usual flair and pace in the rearranged fixture against Saint-Etienne despite an early pressure on Ruffier's goal. Hampered by the absence of many injured players including captain Loic Perrin, Saint-Etienne opted for caution but was caught on the break after 20 minutes. Falcao came close to doubling Monaco's lead 10 minutes after Mbappe broke the deadlock but his shot was blocked by a last-ditch challenge from Florentin Pogba. The second half lacked intensity as Saint-Etienne seemed resigned to its fate, despite a good effort from Veretout that was intercepted by Monaco defender Kamil Glik near the hour mark. Germain then played a nice one-two with Mbappe at the end of a stylish team move but missed an easy chance from close range after connecting with a superb cross delivered by his teammate. Germain made amends in added time, scoring from Thomas Lemar's assist. The referee's final whistle prompted scenes of jubilation at the Stade Louis II, with Germain and Andrea Raggi mingling with supporters bare chested in the stands as coach Leonardo Jardim shed tears of joy. Only Saint-Etienne (10) and Marseille (9) have won more league titles than Monaco in France.
#Radamel Falcao #Monaco #French league title #Saint-Etienne #Kylian Mbappe #French League football #France Ligue 1 #Jordan Veretout #Stephane Ruffier #Valere Germain
You May Also like: