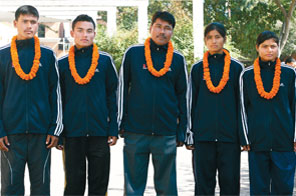 KATHMANDU: A six-member Nepali athletics team left for China to participate in the 18th Asian Athletics Championship slated for November 10-14 in Guangzhou.
The Nepal Amateur Athletics Association (NAAA) selected Pramila Rijal, Keshari Chaudhary, Hari Kumar Rimal and Tilak Ram Mahato for the event after their performance at the fifth National Games in April and open selection tournament. Pramila, who holds the national record of 59.19 seconds in 400m, will participate in the 200m and 400m races. Keshari will compete in 100m race and triple jump, in which she set the national record of 11.30 metres during the fifth National Games.
Likewise, Hari Kumar will participate in the 1500m and 3000m steeple chase while Tilak Ram is scheduled to take part in 100m and 200m races at the Asian meet. The athletes said the championships would help them boost confidence for the 11th South Asian Games to be held in Dhaka next year. Former national athlete Jitendra Chaudhary is the coach of the team and Bhairab Shahi the team manager. Youth and Sports Minister Ganesh Nepali bade farwell to the team today.
Meanwhile, NAAA General Secretary Rabi Raj Rajkarnikar also left for Guangzhou to participate in the 18th congress of the Asian Athletics Association (AAA). The congress will also finalise the hosts for the 11th Asian Cross Country Championships in 2011. The NAAA have also presented their bid to host the championships in Kathmandu. Nepal hosted the seventh edition of championships in 2001 at the Gokarna Forest Resort and the NAAA have planned to use the same venue if the AAA decides to provide the hosting rights to Nepal. “I am pretty sure that the AAA Congress will decide in our favour,” said confident Rajkarnikar.

KATHMANDU: The Nepal Amateur Athletics Association (NAAA) have selected two athletes from the Nepal Army Club to participate in the Singapore Marathon scheduled for December 6. Uttam Khatri and Mahendra Shahi are the long distance runners who will take part in the prestigious event in Asia, informed the NAAA General Secretary Rabi Raj Rajkarnikar. Khatri and Shahi won the third and fourth place respectively at the third Real Kathmandu Marathon held here on September 12. Since the top two athletes Arjun Kumar Basnet and Rajendra Bhandari were selected for the 11th South Asian Games to be held in Dhaka early next year, the NAAA chose the third and fourth place finishers for the Singapore Marathon. The hosts will bear all the expenses for the participants, said Rajkarnikar. — HNS