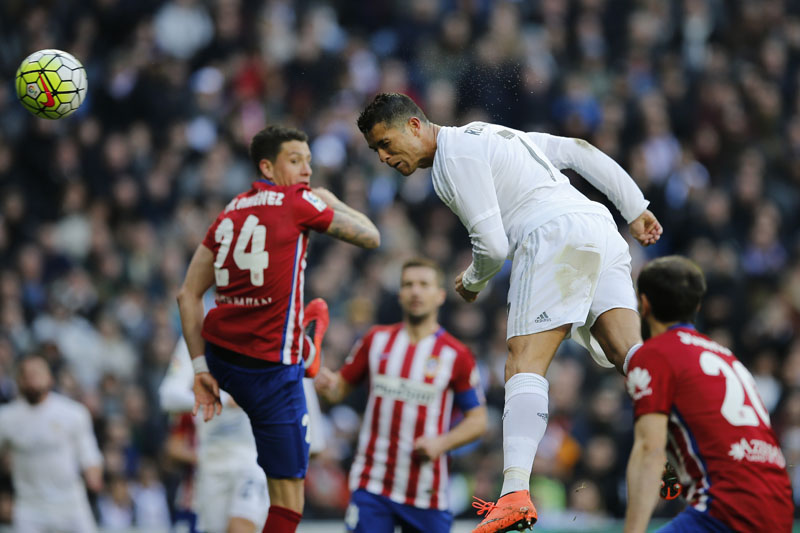 Real Madrid's Cristiano Ronaldo jumps to head the ball towards the goal during a Spanish La Liga soccer match between Real Madrid and Atletico Madrid at the Santiago Bernabeu stadium in Madrid, Spain, on Saturday February 27, 2016. Photo: AP
MADRID: Antoine Griezmann scored a goal early in the second half to give Atletico Madrid a 1-0 win over Real Madrid at Santiago Bernabeu Stadium on Saturday, keeping Atletico's title hopes alive and virtually ending its rival's chances in the Spanish league. The French forward scored with a left-footer in the 53rd minute after a cross by Brazilian left back Filipe Luis, helping visiting Atletico pull within five points of leader Barcelona, which hosts Sevilla on Sunday to close out the 26th round. Real Madrid could drop 12 points behind Barcelona if the Catalan club wins Sunday. It was Real Madrid's first defeat at home since a humiliating 4-0 loss to Barcelona in November. The team had won seven straight at Bernabeu. Fans loudly jeered Real Madrid president Florentino Perez, calling for his resignation. After the final whistle, many fans waved white "goodbye" handkerchiefs to show their displeasure with the president. Some protested outside the stadium, prompting police to intervene to disperse the crowd. "The league is over for us," Real Madrid coach Zinedine Zidane said. "To lose to Atletico at home is very difficult to overcome." It's the third season in a row that Atletico beat Real Madrid at Bernabeu in the Spanish league. "This win gives Atletico Madrid fans reason to feel very proud of their players," Atletico coach Diego Simeone said. "Atletico keeps improving. We are going through a good moment." Simeone said it remains difficult to catch up to Barcelona, which against Sevilla has a chance to tie Real Madrid's record of 34 unbeaten games in all competitions set in 1988 and 1989. "The truth is that Barcelona is very good, it will be difficult for them to lose three games," Simeone said. "Of course you always want more, but we have to keep focused on our goal, which is to finish in the top three." Griezmann got the winner in a breakaway that started near midfield. He carried the ball to the top of the area, fed Luis on the left flank and the Brazilian passed it right back for Griezmann's shot from near the penalty spot. "It was crucial victory for us," Griezmann said. "We will keep fighting." Atletico had not scored a goal in its last two games. It hasn't conceded in four straight matches. Real Madrid started pressuring and controlled the early parts of the game but Atletico improved and didn't allow the hosts to create many chances. Cristiano Ronaldo, who had scored seven goals in his last three games at the Bernabeu, came close to equalizing with a header in the 68th but the ball went straight into the hands of Atletico goalkeeper Jan Oblak. "It was a game we had to win and we didn't," Ronaldo said. "It was already complicated to win the league before this loss, now it's even harder. We have to keep our focus on the Champions League." Ronaldo's best opportunity with the game tied came just three minutes into the second half when he entered the area free from markers but sent his low show just wide of the far post. He had another chance from a free kick in the 32nd but his swerving shot was saved by Oblak. One of Atletico's best chances in the first half had been a long-range shot by Griezmann, forcing goalkeeper Keylor Navas to make a difficult save in the 40th. Madrid wanted a red card for Atletico defender Diego Godin pulling Karim Benzema's jersey when the French striker headed toward the goal in the 31st but the referee only showed Godin a yellow card. Madrid also sought a penalty on Danilo in the 75th. The game match marked the encounter of the league's best offense and the top defense. Madrid entered the match with 71 goals scored, four better than second-place Barcelona, while Diego Simeone's Atletico came in having conceded only 11 goals in 25 matches, seven goals less than fourth-place Villarreal. Both teams were coming off disappointing draws, with Real Madrid drawing at Malaga after a missed penalty kick by Ronaldo and Atletico being held to a scoreless draw by Villarreal at Vicente Calderon Stadium last Sunday. The first Madrid derby this season ended in a 1-1 draw at Atletico's Vicente Calderon Stadium. Real Madrid had the return of Benzema, who missed the game at Malaga because of a back problem. He was substituted at halftime. Zidane could not count on Brazilian left back Marcelo because of a muscle problem.
#Santiago Bernabeu Stadium #Spanish La Liga soccer #Atletico vs Real Madrid
You May Also like: