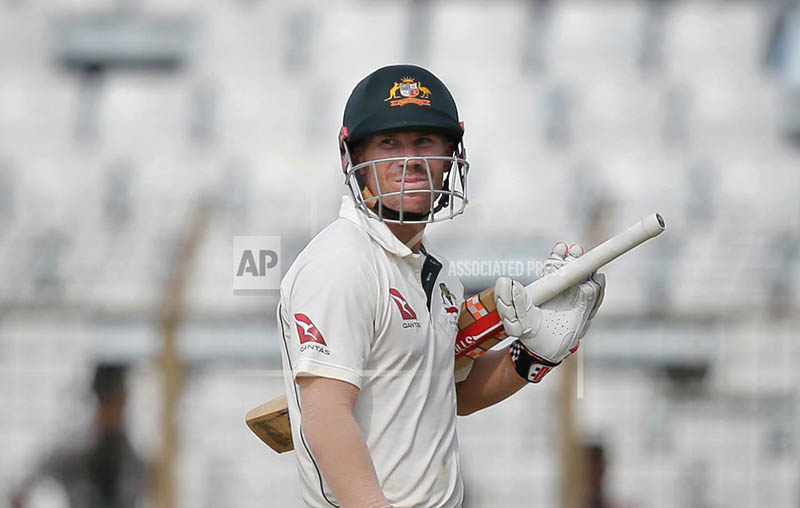 Australia's David Warner looks back as he walks back to the pavilion after his dismissal by Bangladesh's Mustafizur Rahman during the third day of their second test cricket match in Chittagong, Bangladesh, Wednesday, Sept. 6, 2017. Photo: AP
DHAKA: Australian David Warner's second successive hundred against Bangladesh helped his side maintain their slight advantage on the third day of the second and final test on Wednesday. After heavy rain washed out more than a session of the day's play, Australia eclipsed Bangladesh's first innings total of 305 by tea before the hosts retaliated in the final session to reduce the tourists to 377-9. Steve O'Keefe was batting on eight with Australia leading by 72 runs. Nathan Lyon was yet to open his account at the other end. Resuming Australia's innings on 225-2, overnight batsmen Warner and Peter Handscomb batted with the assuredness that was the hallmark of their 152-run partnership. Handscomb ran himself out in his eagerness to help Warner reach the 100 mark when he sprinted for a single before being sent back. Handscomb made a desperate dive but could not beat Shakib Al Hasan's direct throw from square leg. His patient 82 included six boundaries. Warner brought up his 20th test century with his fifth boundary, driving a Nasir Hossain full toss through cover. He celebrated the feat by kissing his cap, leaping in the air and pumping his fist. The century followed Warner's 112 in the first test in Dhaka where Australia were beaten inside four days by the hosts. NEW BALL Bangladesh took the new ball as soon as it was available and Mustafizur Rahman nearly tasted immediate success when he induced a lazy drive from Glenn Maxwell but Mehidy Hasan spilled the catch at gully. Mustafizur dismissed Warner for 123 with a short-pitched ball which the batsman hit to leg slip where Imrul Kayes fumbled before finally taking the catch. Known more for his swashbuckling batting, Warner hit only seven boundaries in his cultured knock, painstakingly constructed over six hours. Mehidy dropped Hilton Cartwright on six off his own bowling, the straight drive bursting through the spinner's hands and hitting him in the rib cage. Cartwright made 18 before edging the spinner to Soumya Sarkar in the slip. Maxwell, who lived dangerously at the other end, made 38 while Matthew Wade managed eight. Ashton Agar made 22 down the order. Bangladesh claimed four wickets in the 23-over final session to stay in the contest. Mustafizur, celebrating his 22nd birthday, claimed (3-84) and off-spinner Mehidy (3-93) shared six wickets.
#Bangladesh #Australia #David Warner
You May Also like: