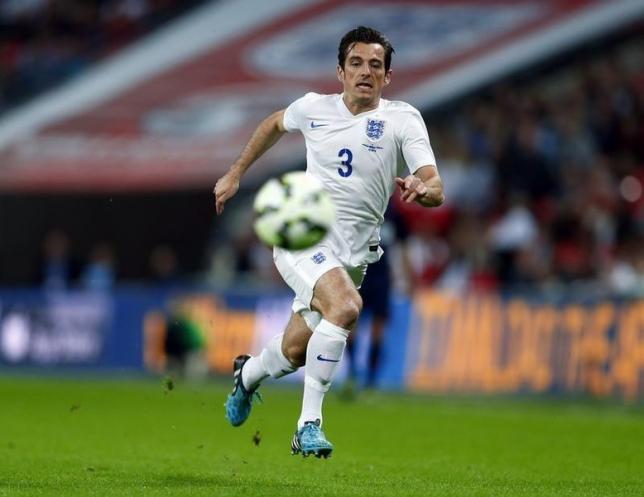 England's Leighton Baines runs for the ball during their international friendly soccer match against Norway at Wembley Stadium in London September 3, 2014. PHOTO: REUTERS
LONDON: The transfer window should shut before the Premier League starts to avoid talented youngsters such as John Stones being forced into "difficult" situations if they attract the "relentless" attention of bigger clubs, Everton defender Leighton Baines has said. The injured England left-back has echoed Toffees' manager Roberto Martinez in the wake of Chelsea's pursuit of the 21-year-old and praised the young defender for handling the intense scrutiny and carrying on performing for the team despite handing in a transfer request. "The manager's touched on it a few times that the window shouldn't be open and I think pretty much everyone in football would agree with that," Baines told the club website (www.evertonfc.com). "It's just a source of entertainment for people on the outside now and it doesn't help anybody in the game," he added. Everton chairman Bill Kenwright and Martinez stood firm in the face of Chelsea's dogged pursuit of Stones, who has played every minute of Premier League football for his team so far. "We're just glad the club took the stance they did and we've been able to keep him," said Baines, who is yet to feature for Everton this season after undergoing ankle surgery in August. "It has been relentless, particularly for John. Seeing him first-hand on a daily basis, it's been difficult for him to deal with. He's still a young lad. "John knows how to play football -- he's being doing it all his life -- (but) he hasn't had to cope with situations like this before." "It's John who has to pick himself up now, dust himself down and move forward," the 30-year-old said. "I think there's a misconception sometimes -- people think that when a footballer hands in a transfer request they do it and go off and play a game of golf or whatever. "But it's actually been such a tough thing and, as a young lad, you do lean on other people a bit more for advice at these times," he added. "I think the true reflection of John has been shown on the pitch -- he's conducted himself brilliantly in the dressing room and he's performed well in all the games."
#Premier League
You May Also like: