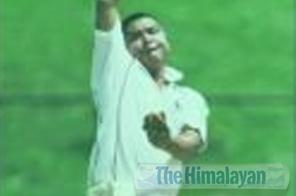 Raju Basnet of Region-3 bowls against Region-5 during the Springwood Twenty20 National Cricket Tournament at the TU stadium on Tuesday. Source: THT

KATHMANDU: Region-VI (Baitadi) registered their first victory in the Springwood Twenty20 National Cricket Tournament at the TU Stadium on Tuesday.

Baitadi beat Region-II (Birgunj) by six wickets in a low scoring encounter. In the other match, Region-III (Kathmandu) — who have already entered the final — became the only unbeaten team in the league round when they hammered Nepalgunj by nine wickets to record their fifth win in the six-team tournament.

In the first match, Birgunj were bowled out for 75 runs in 18.5 overs and Baitadi reached 76-4 in 17.3 overs. Except for Sunil Shah (15) and Ram Naresh Yadav (10), other Birgunj batsmen failed to score in double figures. Both Shah and Yadav — who shared the highest partnership of the innings adding 30 runs for the sixth wicket — hit a six each. Sanjam Regmi (5) and Pradeep Sapkota (unbeaten nine) added 22 runs for the ninth wicket.

In reply, Baitadi made a modest start with openers Binod Bhandari and Prem Chaudhary adding 38 runs in 6.3 overs before the wicketkeeper was bowled by Sanjam Regmi for run-a-ball 22 including three fours.

Prem further added 11 runs for the second wicket with Shakti Bhandari he was caught behind by Aakash Pariyar off the bowling of Anil Mandal. Prem hit two fours in his 23-ball 20.

Shakti and Naresh Budhayer took the team score to 72 before both batsmen fell victim of Pradeep Sapkota. Birgunj skipper Binod Das ran out Shakti for 15 off 35 balls, while Pradeep trapped Budhayer for seven runs. Skipper Chand and Dinesh Agri scored two runs each to complete the formality. Sanjam, Anil and Pradeep all took one wicket each.

In the other match, Kathmandu outplayed Nepalgunj by nine wickets. Batting first after winning the toss, Nepalgunj scored 84-4 in 20 overs before Kathmandu surpassed the total losing one wicket in 11.5 overs.

Nasir Ansari top scored for Nepalgunj with 22 off 19 balls that included a four and a six. The six was the 50th one of the tournament.

21 off 27 balls, while Tajuddin Halwai hit a boundary in his 30-ball 17. Man of the match Raju Basnet was the pick of the Kathmandu bowlers with 3-12 in four overs. Rom Shrestha claimed 2-12 and Pramod Basnet claimed one wicket.

In reply, Kathmandu got off to a flying start with openers Paresh Lohani and Dipendra Chaudhary scoring 79 runs in 10.2 overs before Dipendra was caught by Sunil Sunar off Prafulla Rana with six runs remaining to win. Dipendra hit six fours and a six in his 37-ball 42. Paresh remained unbeaten on 26 off 27 balls that included three fours, while Sanjay Shrestha scored not out five.