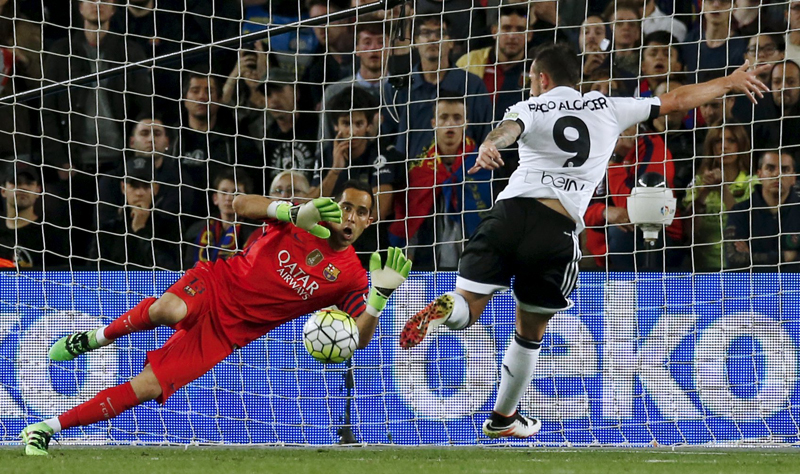 Barcelona's goalkeeper Claudio Bravo blocks a ball against Valencia's Paco Alcacer during La Liga game at Camp Nou Stadium on Sunday, April 17, 2016. Photo: Reuters
BARCELONA: Barcelona's stuttering title bid suffered another setback when they lost 2-1 at home to Valencia as they registered a third straight La Liga defeat for the first time since 2003. Luis Enrique's shell-shocked side are level on 76 points with Atletico Madrid, who knocked the holders out of the Champions League in midweek, and remain top only due to a superior head-to-head record. An own goal by Ivan Rakitic put Valencia ahead after 27 minutes and Santi Mina added a second just before halftime to stun the Barca supporters at the Nou Camp. Lionel Messi scored his 500th career goal to reduce the deficit after 64 minutes but the struggling hosts, who have squandered a nine-point lead, could not find an equaliser. Valencia goalkeeper Diego Alves produced a spectacular save to deny Rakitic late on and Gerard Pique agonisingly missed the target at the near post in stoppage time. Earlier, Atletico Madrid eased to a 3-0 home win over struggling Granada to go level with Barcelona on points after Fernando Torres grabbed his fourth goal in as many games. Spain international Koke opened the scoring after 15 minutes and then teed up Torres for the second in the 59th, while substitute Angel Correa rounded off the victory in the 83rd. Atletico, boosted by a 2-0 win over Barca on Wednesday which put them into the Champions League semi-finals, started brightly with Koke blazing over the bar moments after kick-off. The midfielder proved more accurate minutes later, pouncing on a loose ball after Torres's effort was blocked and drilling a shot into the net. Granada winger Ruben Rochina hit the post later in the half before Torres eased Atletico's nerves by notching the second, latching onto a threaded pass by Koke to lift the ball over goalkeeper Andres Fernandez and into the far corner. Argentine forward Correa came on to replace Atletico's top scorer Antoine Griezmann and made the most of his cameo appearance by racing onto a pass from Saul Niguez down the left and tucking the ball into the far bottom corner.
#Barcelona #Champions League #La Liga #Antoine Griezmann #Ivan Rakitic
You May Also like: