Barcelona wary of dangers on rare trip to Canary Islands 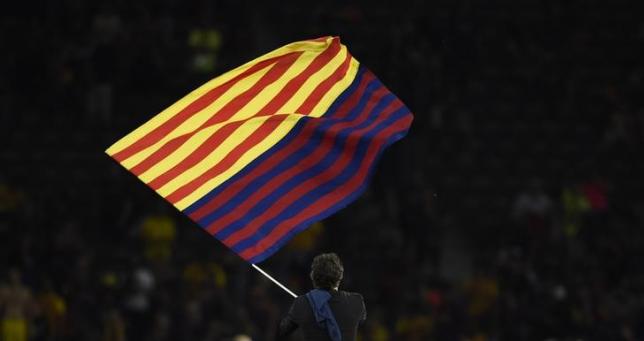 Barcelona coach Luis Enrique celebrates with a flag after winning the UEFA Champions League. Reuters
BARCELONA: Barcelona are fully aware of the difficulties posed by their visit to relegation candidates Las Palmas in La Liga on Saturday as they bid for a second successive treble. Coach Luis Enrique noted that the promoted Canary Islanders have picked up 18 of their 21 points at home and said their 18th place belies their capacity to play good, possession football. “They have a standard of play to be higher in the standings... It won’t be easy to rob them of the ball,” he told a news conference on Friday. “From now the teams at the bottom have greater needs and they tend to win more matches during this stretch of the season.” Barca, who are also in the King's Cup final, hold a six-point lead over Atletico Madrid, who host Villarreal on Sunday after Real Madrid, a point further back, visit Malaga. The Catalans also face Arsenal in the last 16 of the Champions League with the first leg in London on Tuesday. “If we don’t do well (at Las Palmas) it won’t be because we are thinking of Arsenal but because we were unlucky or our opponents were better than us,” Luis Enrique said. “I see a group (of players) with clear objectives and fully aware of the difficulty of achieving those (three) titles. “Neither the staff nor the players think that it’s all done... We professionals are very cautious and until it’s mathematically (certain) no-one is going to take it as done." He added that his team knew how to handle an accumulation of matches in three competitions. “If anyone has shown that they know how to compete every three days regardless of the opponent or competition, it’s us,” he said. Barca will be without midfielder Sergio Busquets, serving a one-match suspension for an accumulation of yellow cards, while central defender Gerard Pique is rested. Luis Enrique has included Canaries-born former Las Palmas forward Sandro Ramirez in his squad. Sandro last played in the Barca first team in December.
#Barcelona #Canary Islands
You May Also like: