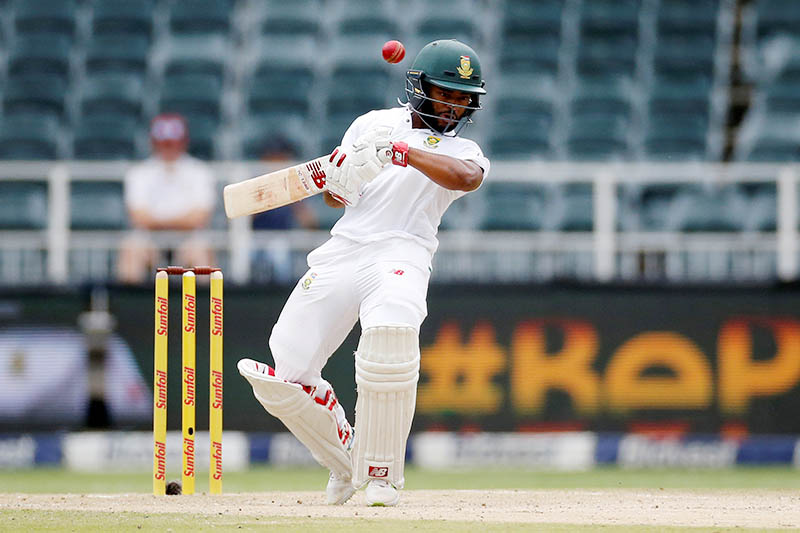 South Africa's Temba Bavuma in action. Photo: Reuters
JOHANNESBURG: South Africa's Temba Bavuma was left stranded on 95 not out as they tightened their grip over scandal-hit Australia after reducing the hapless visitors to 110 for six at the close on the second day of the fourth and final test on Saturday. Aided by Bavuma’s brilliance, South Africa posted 488 in their first innings and lead by a massive 378 runs at the Wanderers as they seek a first home series win over the Australians in almost 50 years. The controversial tour looks to be coming to a meek end for the visitors in a game they need to win to share the series and their new captain Tim Paine (five) and Pat Cummins (seven) will resume on the third day facing a daunting task. Australia need a win to share the series, an outcome that would provide hollow comfort after the chaos that engulfed the team in the wake of their ball-tampering in the third test in Cape Town and the crisis that followed this week. The squad was bolstered by openers Joe Burns and Matt Renshaw, who arrived in the country 48 hours before the start of the fourth test along with all-rounder Glenn Maxwell, after desposed captain Steve Smith, David Warner and Cameron Bancroft were sent home for their part in the scandal. However, if the tourists had hoped that fresh blood at the top of the order might spark a change of batting fortunes, it proved false optimism as they were blasted out. Burns’ (four) tame prod saw him edge Kagiso Rabada to a diving Faf du Plessis at second slip, while Queensland opening partner Renshaw (eight) provided a simple catch to wicketkeeper Quinton de Kock off Vernon Philander (3-17). AUSTRALIAN DISARRAY Peter Handscomb has been on tour since the start, but his long wait for a chance to bat lasted one ball when he played onto his stumps as Philander found the right amount of movement. Australia were in disarray at that stage on 38 before Usman Khawaja (53) and Shaun Marsh managed a slow recovery. The pair put on 52 for the fourth wicket, but Khawaja was superbly caught by De Kock having got a feather-edge down the leg-side to give Philander his third. Mitchell Marsh (four) then played on to a Morne Morkel delivery as the light faded, his early promise on the tour having now been long forgotten, while his brother Shaun (16) edged to AB de Villiers at slip off Keshav Maharaj. After Aiden Markram’s masterful 152 on the opening day, Bavuma was left stranded five runs short of what would have been a second test century when he ran out of partners. His 95 not out was deserving of three figures as he manoeuvred the ball around the ground with great skill, adding 85 for the seventh wicket with De Kock (39) and 76 for the ninth wicket with Maharaj, who smashed a career-best 45 from 51 balls. But when the latter slashed at a wide delivery from the excellent Pat Cummins (5-83) and was caught by wicketkeeper Paine, Morkel, playing in his final test, edged the first ball to Handscomb at second slip and Bavuma was denied the chance to claim a deserved ton.
#Australia #South Africa #Temba Bavuma
You May Also like: