'We are the best': Buffon and Casillas to resume rivalry 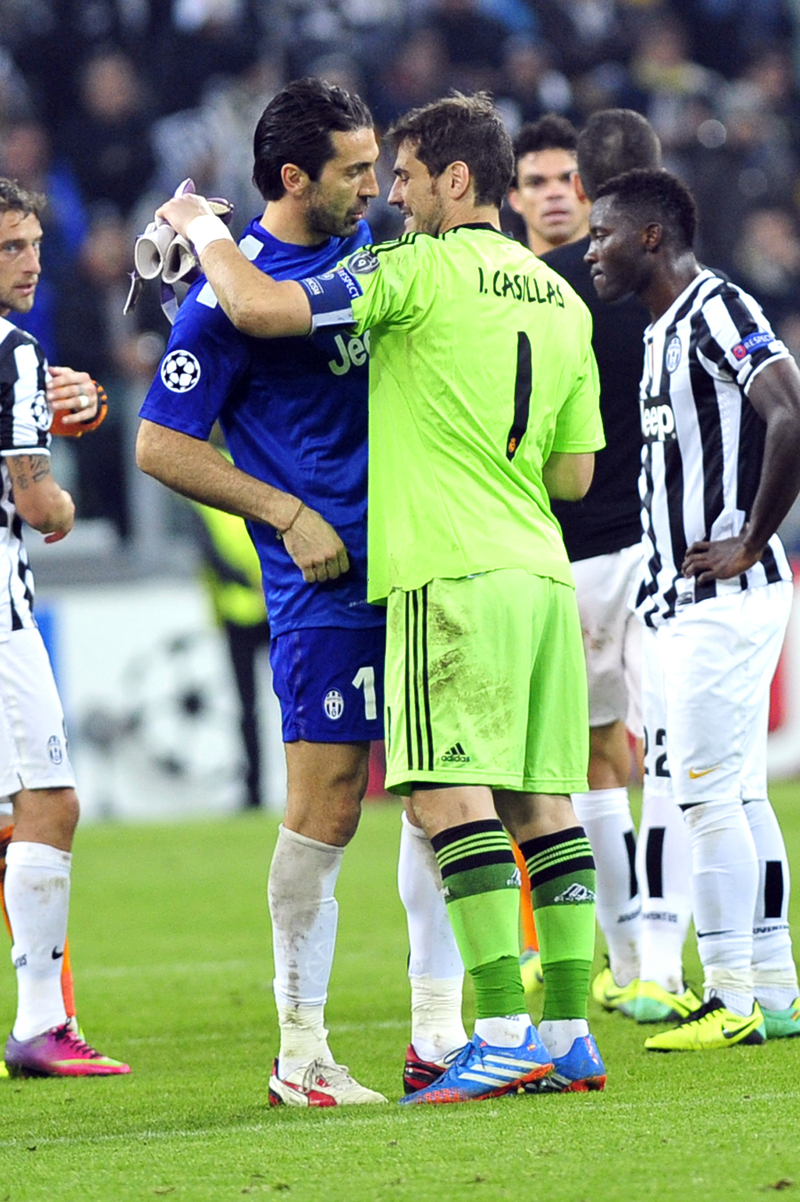 FILE - In this Nov. 5, 2013 file photo Juventus goalkeeper Gianluigi Buffon, left, greets then Real Madrid goalkeeper Iker Casillas at the end of the Champions League, Group B, soccer match between Juventus and Real Madrid at the Juventus stadium, in Turin, Italy. Photo: AP

ROME: It will be a meeting of goalkeeping greats when Gianluigi Buffon faces old rival Iker Casillas on Wednesday in the Champions League.

And while both players may be reaching the end of their careers, Buffon and Casillas each still have something to prove in their 17th career meeting this time in a match between Juventus and FC Porto.

The 39-year-old Buffon has won virtually everything except for the Champions League finishing runner-up twice, in 2003 and 2015, with Juventus.

The 35-year-old Casillas has won everything including three Champions League titles but is looking to regain his spot on Spain's national team and prove his former club, Real Madrid, wrong for casting him aside two years ago.

"Every player knows it takes time to get used to a new city, new surroundings and a new way of life," Casillas told UEFA.com. "Of course when you've spent so long in the same place, as was the case for me, it's strange to experience a change of scenery. Maybe I didn't reach the level I wanted last year, I didn't feel completely comfortable.

"I haven't been called up to the Spain squad, so I've had more time to focus on my club," Casillas added. "I've noticed the effect. First you need to be settled at your club and then, who knows what might happen?"

Whatever the result in the first leg, Casillas and Buffon will continue to have mutual respect for each other.

The pair engaged in an entertaining exchange on Twitter recently, with Casillas asking Buffon, "What do you think? For me you the best!!"

To which Buffon responded, "I don't choose. We are the best," adding a smiley face.

In their eight national team meetings, Casillas' Spain has had the better record with three victories to only one for Buffon's Italy including Spain's penalty shootout win in the quarterfinals of the 2008 European Championship and Spain's victory in the Euro 2012 final.

In club-level meetings, the goalkeepers have three wins apiece but Buffon's Juventus has prevailed in all three knockout ties including the 2003 and 2015 Champions League semifinals.

"I am lucky enough to be three years younger than Gigi. I was 14 when I started and he was 18," Casillas said. "I was able to see and appreciate his style and personality.

As I grew up, I looked up to him and then we evolved together and we've had similar careers. We've both won a lot and we've often played against each other. I think Italian football won't have another goalkeeper like him."

The similarities between Casillas and Buffon don't end on the field. Both goalkeepers have female partners who are sports journalists.

Casillas famously kissed Sara Carbonero during a live interview after winning the 2010 World Cup and the couple was married a year ago.

Buffon has a son with Sky Sports studio host Ilaria D'Amico, who still addresses Buffon by his last name in interviews.

Both players also have the same number of appearances for their national teams 167.