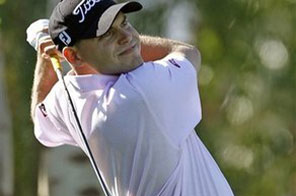 LA QUINTA, Calif: Bill Haas' hands were frigid and shaking when he stepped up to his second shot on the 90th hole, knowing he probably needed a birdie to win his first PGA Tour title at the Bob Hope Classic after 140 fruitless starts.

A $900,000 check and a Masters exemption were riding on this tense finish to a marathon tournament Monday. Haas even figured his famous father might be watching somewhere in the gallery, although he wasn't sure.

It was all a recipe for panic, but Haas cooked up something remarkable instead.

"It was the most nervous I've ever been," Haas said. "I've been nervous over 3-footers to finish fifth, but it was different knowing that if I executed this shot, it could mean the difference (between) winning or finishing fifth."

So he warmed his hands, steadied his will and nailed an aggressive approach shot on the 18th after his two co-leaders failed to do it. He then two-putted to a one-stroke victory, putting his name in Hope Classic lore alongside his father and finally doing what's been expected from the talented son of Jay Haas since shortly after he picked up a golf club.

Haas hugged his father after hitting a perilous 1-footer to finish one stroke ahead of Matt Kuchar, Tim Clark and Bubba Watson with an 8-under 64, but he did the toughest work with his 3-iron moments earlier. Determined not to come up short on the green or the scoreboard, Haas expertly dropped a 3-iron behind the pin, setting him up for 30-under 330 finish and the chance to scratch his name off the list of good players with no wins.

After six days and five rounds over four courses, the 27-year-old former can't-miss prospect finally had a PGA title and an achievement befitting his pedigree.

"Patience isn't one of my key virtues," Bill Haas said. "It's something I'm still trying to learn. This week, we were forced to be patient. Who knows? Maybe the rainout was good for me. It obviously was. It worked out for the best."

Nobody was more impressed than Jay Haas, who benefited from the rain that washed out Thursday's second round at the Hope Classic and pushed the finale to Monday. The 1988 Hope Classic winner was able to make it back to the mainland from his Champions Tour event in Hawaii in time to see his son in competition for the first time in about two years.

"To win the same tournament I won is special, and then for me to get to see it — that's really special," said Jay Haas, who texted his son on Sunday night with a simple message: "Hit when you're ready, and never before."

But Bill Haas didn't charge in front until the final hole after a backstretch battle with four players — three seeking their first Tour victories. He was the last of three co-leaders to play the par-5 18th, but Kuchar and South Africa's Clark both missed birdie putts at the Arnold Palmer Private course, with Kuchar lamenting his inexact approach shot before Clark laid up.

Haas made sure he had no regrets.

"I'd been wanting to win from the first tournament I played, but it's a process, and there's a lot to it," said Haas, a touted rookie in 2006. "It's special, but I don't know if it's a monkey off my back. I know how hard it was to win, and I'm grateful."

Fourth-round co-leader Watson also birdied the 18th after barely missing a chip for eagle, grabbing a share of second place.

Haas missed the cut at last week's Sony Open, but credited his steady play in Palm Springs to a tip he received from teaching pro Bill Harmon while practicing with his father in nearby Indian Wells last Monday.

"It's definitely neat that down the road, 22 years from now, we can look at both our names on the list here," Bill Haas said. "I'm not trying to compare myself to him. He's almost unreachable."

They're the eighth father-son combination to win on the PGA Tour, but Bill Haas spent most of the day trailing Kuchar, who came from three shots back and rocketed up the tight leaderboard.

Kuchar had eight birdies in his first 11 holes, but just one in the last seven. Although his 63 was the best final round, he wished for a better second shot on the 18th. His hybrid approach landed well back on the fringe, eventually leading to a missed 13-foot birdie putt.

"It's a hole where you're counting on making a 4," Kuchar said. "I put myself in a difficult situation ... but shooting 63 is fantastic. I wasn't sure if I had that much in me today. It was a great round of golf."

Rookie Alex Prugh, who shared the lead with Watson entering the final round, started slowly but closed with three straight birdies to finish fifth at 28 under in his third career PGA Tour event. Mike Weir, the 2003 champion, threatened before dropping back with a double bogey on the 13th, eventually finishing sixth at 26 under.

Kuchar went ahead with six birdies on the front nine at the Palmer course, surging past Watson and Prugh early in the round. Haas stayed close to Kuchar's blistering pace with five birdies on the first eight holes, and Clark caught up on the 15th hole with a 6 1/2-foot birdie putt.

Kuchar's fast start didn't shake Clark, who has never won on the PGA Tour. He has a runner-up finish for the sixth straight year, including his 2006 finish at the Masters.

"I made a bunch of birdies, (and) you would think that I putted my eyeballs out, but I missed a lot of short ones," Clark said.

"There's always going to be an exciting day with so many guys bunched in there, and I started to make some birdies on the back nine to get back into it," Clark added. "When you know you have to make birdies, it makes things a little bit easier."

DIVOTS: Vaughn Taylor, who lost a six-hole playoff at Turning Stone to Kuchar last October in the PGA Tour's most recent Monday finish, shot a final-round 67 to finish in the five-way tie for 10th. ... Shane Bertsch, who led with an opening-round 62, ended up tied for 71st after a 69-77-71-72 finish. ... Al and Brent Geiberger were the last father-son duo to win on the tour.

#Bill Haas wins Hope Classic for 1st PGA victory
You May Also like: