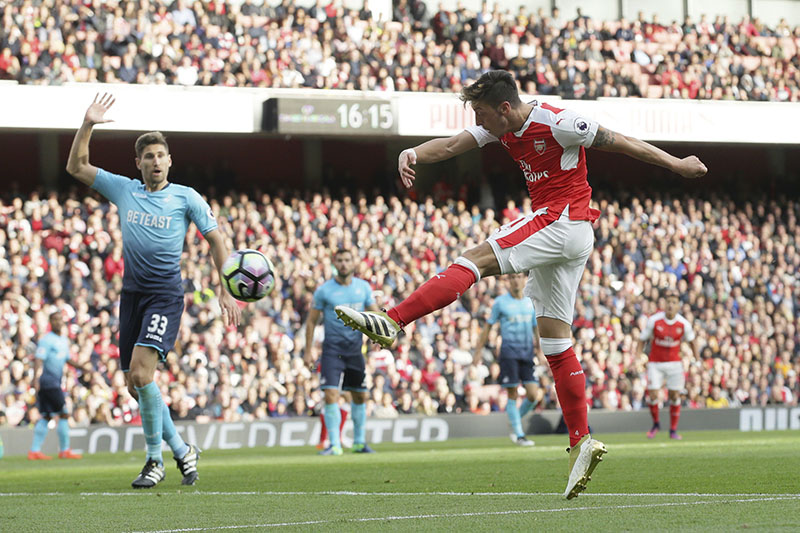 Arsenal's Mesut Ozil (right) scores a goal during the English Premier League football match between Arsenal and Swansea City at The Emirates Stadium in London, on Saturday, October 15, 2016. Photo: AP
LONDON: Arsenal beat Swansea 3-2 in a thrilling encounter at Emirates Stadium to condemn Bob Bradley to defeat as he became the first American to manage in the English Premier League on Saturday. The scale of the task facing the former US manager became clearer in a woeful defensive showing from his side. Twice in seven first-half minutes, Swansea was the architect of its own downfall, failing to clear and allowing England winger Theo Walcott the easiest of doubles from inside the six-yard box. Mesut Ozil's stunning second-half volley ultimately secured a sixth consecutive league victory for Arsenal, but Bradley could take consolation from the fight his side showed, twice pegging the home side back through goals from Gylfi Sigurdsson and Borja Baston. Swansea's fourth consecutive league defeat added up to its worst start to a season in any division, 19th place, and just four points from its eight fixtures. Arsenal, meanwhile, moved level on points with league leader Manchester City, trailing Pep Guardiola's side only on goal difference. The in-form triumvirate of Alexis Sanchez, Mesut Ozil, and Walcott continued to produce the sort of passing and movement that opposing defenses have struggled to cope with. Arsenal made its early territorial dominance pay in the 26th as Sanchez's looping pass found Hector Bellerin on the right of the box to head down for Walcott to poke home — only after Jordi Amat and Fabianski wasted opportunities to clear. Seven minutes later, Walcott was celebrating his fifth league goal after Jack Cork was guilty of failing to clear Santi Cazorla's corner. Arsenal was seemingly on its way to a comfortable victory until carelessness from Xhaka gifted the ball on the edge of his own box to Sigurdsson, who expertly found the top corner with a curling left-footer in first-half stoppage time. Arsenal appeared to have seen off the visitors once more when Ozil found the top corner with a sublime volley from Sanchez's cross to the back post. But Swansea, inspired by winger Modou Barrow, was not resigned to defeat. Barrow repeatedly burst past Nacho Monreal, and made his dominance over the Arsenal left back count in the 66th, when he centered for substitute Baston to pull Swansea back into the game. The Barrow show continued as, four minutes later, he was hacked down by Xhaka, who was perhaps harshly shown a straight red card by referee Jonathan Moss, completing a highly forgettable afternoon for the midfielder. With a man advantage and its confidence boosted, Swansea spurned two fine opportunities to equalize. First, Barrow headed Wayne Routledge's cross straight at Petr Cech, and Sigurdsson failed to convert his cross.
#Arsenal #Swansea City #English Premier League football #Bob Bradley #Arsenal vs Swansea City
You May Also like: