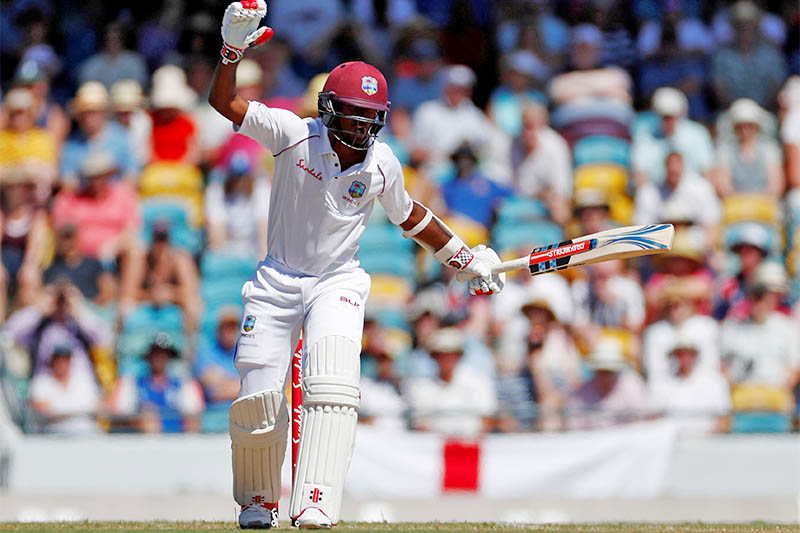 West Indies' Kraigg Brathwaite. Photo: Reuters
JAMAICA: West Indies opener Kraigg Brathwaite will captain the team in place of the suspended Jason Holder when they face England in the third and final test starting in St Lucia on Saturday, Cricket West Indies said. Holder was banned by the International Cricket Council because of his team's slow over rate during the second match in Antigua, which the hosts won by 10 wickets to take an unassailable 2-0 lead in the series. Brathwaite previously skippered West Indies in their series defeat by Bangladesh in November when Holder was injured. "With Jason Holder missing out on the last test, Kraigg Brathwaite will take the reins of captaincy," chairman of selectors, Courtney Browne said. The selectors added pace bowler Keemo Paul to the 14-member squad while Alzarri Joseph, whose mother died during the second test, was also included. "Our heartfelt condolences to Alzarri and his family on the passing of his mother. His heroics in the test were outstanding and shows a player of great character," Browne added. "We also welcome Keemo Paul back to the squad. He's having a good showing in the West Indies first-class championship." Squad: Kraigg Brathwaite (captain), Darren Bravo, Shamarh Brooks, John Campbell, Roston Chase, Shane Dowrich, Shannon Gabriel, Shimron Hetmyer, Shai Hope, Alzarri Joseph, Keemo Paul, Kemar Roach, Oshane Thomas, Jomel Warrican.
#Jason Holder #Kraigg Brathwaite
You May Also like: