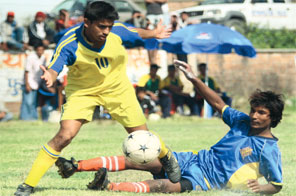 Ujjwal Tiwari of Birendra Sainik Awasiya Mahavidhyalaya (left) vies for the ball with a player of Rambhakta Memorial English School during their match at the TVS Cup third Inter-school Invitational Football Tournament in Bhaktapur on Thursday. Source: THT

BSAM opened the scoring through Sandip Gurung’s goal in the seventh minute, while Roshan Rai doubled the lead in the 17th minute and Uttam Gurung made it 3-0 three minutes later. Nirajan Pudasaini struck a hat-trick scoring in the 21st, 52nd and 56th minutes. Anup Subedi scored in the 62nd and Anil Adhikari completed the rout with a goal in the 69th minute.

In the second match, SOS Balgram squandered a two-goal lead before losing 5-6 to GEMS in tie-breaker. SOS Balgram took a lead in the 26th minute through a goal from Suraj Thapa, while Nischal Gothe doubled the lead in the 32nd minute. After the break, Bishesh Joshi reduced the deficit in the 55th minute and Subodh Chaudhary netted the equaliser for GEMS.

Ujjwal Tiwari of BSAM and Nischal Gautam of GEMS won the man of the match awards.

#BSAM #GEMS advance to semi-finals
You May Also like: