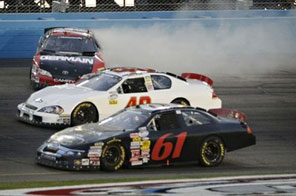 Michael Annett, top, skids out of turn one as Josh Wise (61) and Scott Lagasse Jr. drive past during the 15th lap of the NASCAR Nationwide Bashas' Supermarket 200 auto race Friday, April 9, 2010 in Avondale, Ariz. Source: AFP

AVONDALE: Kyle Busch recovered from a wild sequence in which he lost the lead on a restart and fell 20 seconds behind after a drive-through penalty to win the NASCAR Nationwide Series race Friday night at Phoenix International Raceway.
Busch was back to 10th before the final restart with eight laps left, even after making contact with teammate Joey Logano on pit road and saying on the radio that he was having transmission problems. But when the race restarted, Busch charged through the field to retake the lead in three laps and won by 1.55 seconds over Kevin Harvick.
"All I know is that I paid back NASCAR by winning," Busch said.
After his 32nd career Nationwide victory, his third at the oddly shaped mile track, Busch shredded the rear tires on his No. 18 Toyota with a celebratory burnout.
Busch had already led 121 laps when he lost the lead on a restart that was immediately followed by an accordion-like pileup that involved at least 10 cars and brought out a nearly 10-minute red flag.
Brad Keselowski, who finished third and took over the series points lead, was on the inside on that restart on lap 137 of 200. Busch, then the leader and in control of the restart, was on the outside but passed through the restart zone without accelerating. Keselowski charged ahead at the line when the green flag came out.
"When you get to the first line, you have to maintain your speed. Once you get to the second line, it's free game," Keselowski said. "I maintained my speed and he did not. When I got to the second line, I just went. That's the rule, and the interpretation I have of it."
Some cars behind them seemed to take the queue from Keselowski, some of them speeding up while others checked up to avoid hitting others. That created a mangled mess of cars near the start-finish line.
Busch and his team argued vehemently during the red flag and ensuing caution that he should be installed the leader. Robin Pemberton, NASCAR's vice president for competition, said Keselowski was right.
When the race finally resumed on lap 145, Busch clearly jumped the restart to pass Keselowski. Busch avoided a black flag when he gave up the lead after being notified by NASCAR of that violation, but still had to serve a drive-through penalty. That dropped him to 19th spot, 20 seconds behind the lead pack.

#Busch overcomes wild sequence to win at Phoenix
You May Also like: