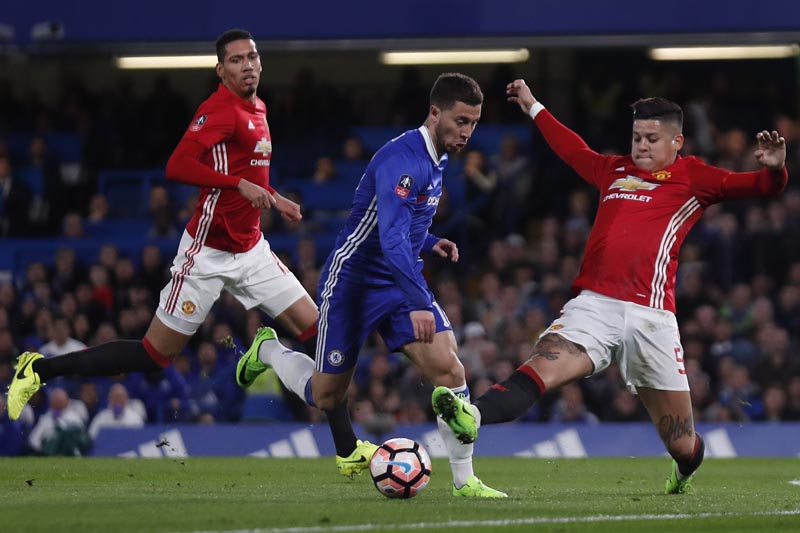 Chelsea's Eden Hazard in action with Manchester United's Marcos Rojo. Photo: Reuters
LONDON: Chelsea manager Antonio Conte took a swipe at Jose Mourinho's tactics on Monday by accusing his Manchester United team of trying to kick tricky forward Eden Hazard out of their FA Cup quarter-final at Stamford Bridge. Hazard survived the onslaught and helped Chelsea run out 1-0 winners in a prickly game, with United reduced to 10 men in the 35th minute when Spaniard Ander Herrera received a second yellow card. "We came to play football... but for 25 minutes it was impossible for Eden Hazard to play, because he was kicked," Conte told reporters. "It could be a tactic. I think everyone saw this... Sometimes when you play against a player with a good talent you try to intimidate this player," the Italian added. "I think that the referee must protect this type of player." Conte, whose Premier League leaders have been drawn to play London rivals Tottenham Hotspur in the semi-finals, praised Belgium forward Hazard's patience. "It's very difficult and very dangerous to receive a kick from the back... He has a strong character and he showed that today." Conte, chided by his predecessor Mourinho for celebrating too wildly after the fourth goal of Chelsea's 4-0 Premier League drubbing of United last October, said he controlled his emotions during Monday's tie. But the pair had squared up on the touchline in the first half after a series of crunching tackles on Hazard and the fourth official had to stand between them. Referee Michael Oliver paused the game to tell the two manaagers to calm down. A fist pump rather than a traditional leap into the crowd by Conte followed N'Golo Kante's 51st minute goal for Chelsea. "I controlled the emotion very well today. I didn’t exalt our goal but its normal for managers to try to do our best to push our team," the Italian said. The game had been billed as a showdown between Chelsea managers past and present but Conte, aiming for a league and cup double said: "The coach is not the most important thing. "The most important thing is what happens on the pitch. For me what happens on the outside is only circus."
#Premier League #Chelsea #Manchester United #FA Cup #Tottenham Hotspur #Eden Hazard #Ander Herrera #Antonio Conte
You May Also like: