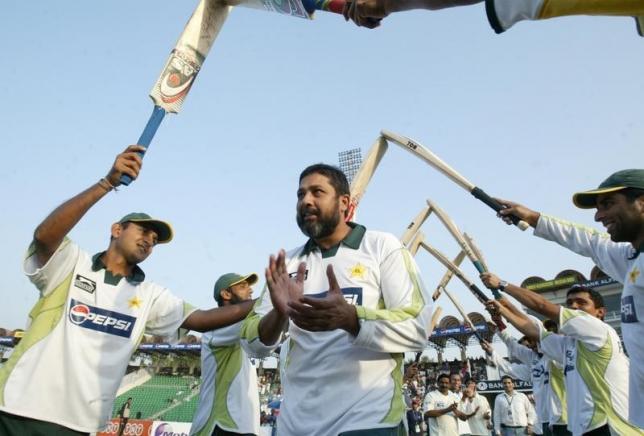 Pakistan's cricket players pay respect to Inzamam-ul-Haq (C) on the fifth day of their second test cricket match against South Africa at Gaddafi Stadium in Lahore October 12, 2007. REUTERS
Former Pakistan cricket captain Inzamam-ul-Haq has called for patience as he begins his new role as chief selector and says there is no quick fix to solving the side's problems. Pakistan rose to number two in the test rankings last year after series wins in Sri Lanka, Bangladesh and by beating England in the United Arab Emirates in November. However, they have failed to replicate the success in limited-overs formats recently and started 2016 with defeats in both 50-overs and Twenty20 series in New Zealand. "It's the start, I don't have a magic wand," Inzamam told reporters. "It will take time, there will be technical things and other problems too which we have to see. "We have to be patient, don't expect anything soon." Pakistan won two of four matches in the Asia Cup T20 tournament in Bangladesh before exiting the World Twenty20 in India on the back of three group stage defeats. The results prompted head coach Waqar Younis to resign and saw all-rounder Shahid Afridi lose the T20 captaincy, while the selection committee was also dissolved by the board (PCB). Inzamam, 46, quit his position as Afghanistan head coach to take up his new role with Pakistan, who won the 50-overs World Cup in 1992 and the T20 version in 2009. The former batting great guided Afghanistan to the Super 10 stage of the World Twenty20, where they collected a win over eventual champions West Indies. His contract with Afghanistan ran until the end of the year. Inzamam's next assignment will be to select the Pakistan squad for a full tour of England starting July, when they play four tests, five ODIs and a T20 match. The team will also play two ODIs against Ireland after the tests in England. He said it was important to build a pool of players and put the effort into helping them develop. "When you make changes, you face problems, but we will be back on track if we make a pool of players," he added. The former right-handed batsman played 378 one-day internationals and 120 tests for Pakistan and also served as the team's batting consultant for a brief period in 2012. Pakistan are currently ranked fourth in tests, eighth in ODIs and seventh in T20s.
#Pakistan #Inzamam-ul-Haq
You May Also like: