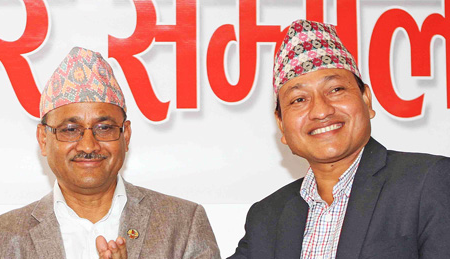 Minister Paudel (Left) and NSC Member Secretary Bista. Photo: THT/File
KATHMANDU: The Commission for the Investigation of Abuse of Authority (CIAA) on Friday recommended Prime Minister Sushil Koirala to take action against Minister for Youth and Sports Purushottam Paudel, accusing the latter of doing an "improper act". The anti-corruption constitutional body said Paudel violated Sections 3(c), 3(d) and 3(g) of the CIAA Act, 1991 while appointing Keshav Kumar Bista as the Member Secretary of the National Sports Council. Paudel, hence, should be booked as per Section 12(a) of the same Act, the Commission said. According to the anti-corruption constitutional body, Bista was banned from all sports-related activities for a year since October 19, 2014 for his involvement in helping some Nepali players run away in Incheon of South Korea during the 17th Asian Games. A complaint had been filed at the CIAA claiming that Bista had received Rs 1.5 million from each of the four players for helping them flee. Bista was appointed Member-Secretary of the national sports governing body on June 25, 2015. But, the CIAA observed that a meeting headed by Minister Paudel himself had decided to ban Bista among others from all sports-related activities since October 19 last year. Accordingly, Bista was also restricted from enjoying any state facility as per the decision, the CIAA claimed. The Ministry of Youth and Sports had endorsed the decision on November 6. Meanwhile, the Commission also urged the Ministry to take actions against Bista as per the Section 12(b) of the CIAA Act, 1991. Bista's appointment to the post had drawn criticism from political and sports fraternities then. Some leaders of Minister Paudel's party CPN-UML had also criticised the decision and demanded that Paudel be removed. READ ALSO:
#corruption case #Keshav Kumar Bista #Minister of Youth and Sports Purushottam Paudel #National Sports Council (NOC) #Civil Aviation Authority of Nepal (CIAA)
You May Also like: