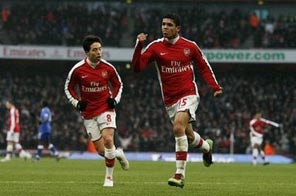 Arsenal's Denilson (right) celebrates scoring a goal during their Premier League match against Everton at the Emirates Stadium in London, on January 9. Manchester United claimed top spot at the weekend with a Wayne Rooney-inspired 4-0 demolition of Hull, but Arsenal will move back above them and into pole position if they can take all three points from their trip to Aston Villa. Source: AFP

LONDON: The English Premier League title battle enters a potentially decisive phase on Wednesday as Arsenal and Chelsea go into tough fixtures aiming to replace Manchester United at the top of the table.

United claimed top spot at the weekend with a Wayne Rooney-inspired 4-0 demolition of Hull, but Arsenal will move back above them and into pole position if they can take all three points from their trip to Aston Villa, a side chasing a top four finish themselves.

Chelsea, who are level on points with the Gunners but have played a game less, entertain Birmingham, who have put together an impressive 15-match unbeaten run in all competitions.

Wednesday's programme also sees Blackburn entertain Lancashire neighbours Wigan with both clubs uncomfortably close to the relegation zone, while Everton will seek to bounce back from the disappointment of their weekend FA Cup exit at the hands of Birmingham when they take on Steve Bruce's Sunderland.

With Manchester United due at the Emirates on Sunday, it is arguably Arsenal who have most to lose on Wednesday with Arsene Wenger's men starting a run of matches which also includes clashes with Chelsea and Liverpool.

The importance Wenger attaches to that sequence of fixtures was reflected in his making nine changes from the side that beat Bolton last Wednesday for the FA Cup tie at Stoke at the weekend.

The likes of William Gallas were sorely missed as the Gunners went out of the Cup but Wenger will regard that as a bearable setback if his squad are still in contention for their first league title since 2004 in a month's time.

"Our selection at Stoke was simple," the Frenchman said. "Take a look at our schedule and you must see we cannot play the same 11 every time. That is for sure."

Birmingham defender Roger Johnson will realise a lifelong dream when he plays at Chelsea for the first time.

The former Cardiff player was brought up a Chelsea fan and while he will be trying his hardest to put a dent in their campaign, he expects Carlo Ancelotti's men to go on and lift the title.

"I still get to watch as many Chelsea games as I can, mainly mid-week when Birmingham are not playing, and John Terry is a player I look up to," Johnson said.

"I think they'll win the league. They have been better than most sides this season. Manchester United haven't been quite as good as in previous seasons. Arsenal have come up on the rails in recent weeks but Chelsea have that strength to grind results out.

"They've done that for most of the season and, if they have a good second half, they should easily win the title."

#Crunch time looms in EPL title race
You May Also like: