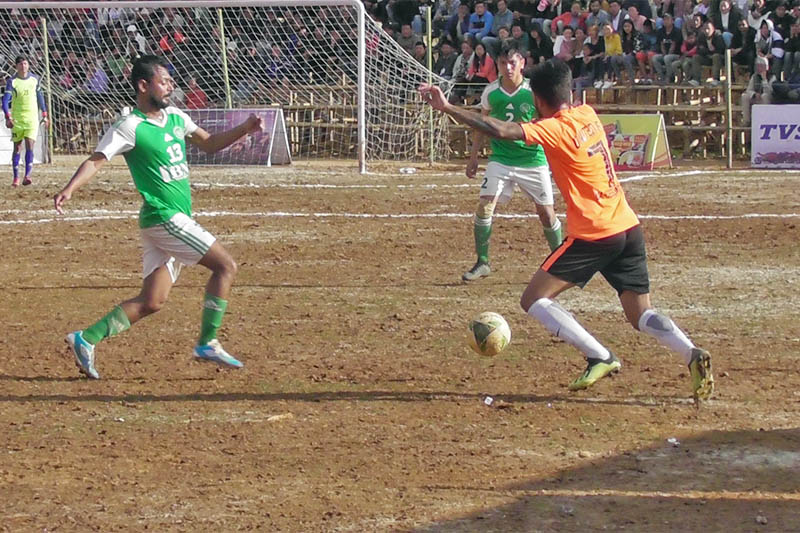 Players in action during Panchthar Gold Cup in Phidim, on Tuesday, April 09, 2019. Photo: Laxmi Gautam/THT
PHIDIM: The visiting team Darjeeling United beat defending champions Birtamode United 3-2 and advanced into the semi-finals of the ongoing Panchthar Gold Cup in Phidim on Tuesday. Darjeeling United took the lead after Dilen Loktam scored a suicide goal in the 19th minute at Phidim Secondary School ground today. Karan Rai lashed onto a through pass to notch a goal and doubled the team's tally in the 27th minute. Despite conceding two early goals, Birtamode United levelled the score in the second half. Dilen Loktam amended his earlier error with a goal in the 79th minute and two minutes later Bishal Rai equalised with a sublime finish in front of full house crowd. As the game was heading into extra time, Karan Rai scored his brace and team's third all-important goal to stun the defending champions right at the dying minutes of the second half. In other quarter-finals tomorrow, Jawalakhel Youth Club (Kathmandu) will take on Bijaya Youth Club (Hetauda) for a place in last four. A total of ten teams including 'A' division teams are participating in the tournament. The winner will walk away with a cash purse of Rs 0.4 million and runner-up will get Rs 0.2 million along with the trophy, certificates and medals, according to the organisers.
#Birtamode United #Panchthar Gold Cup #Darjeeling United
You May Also like: