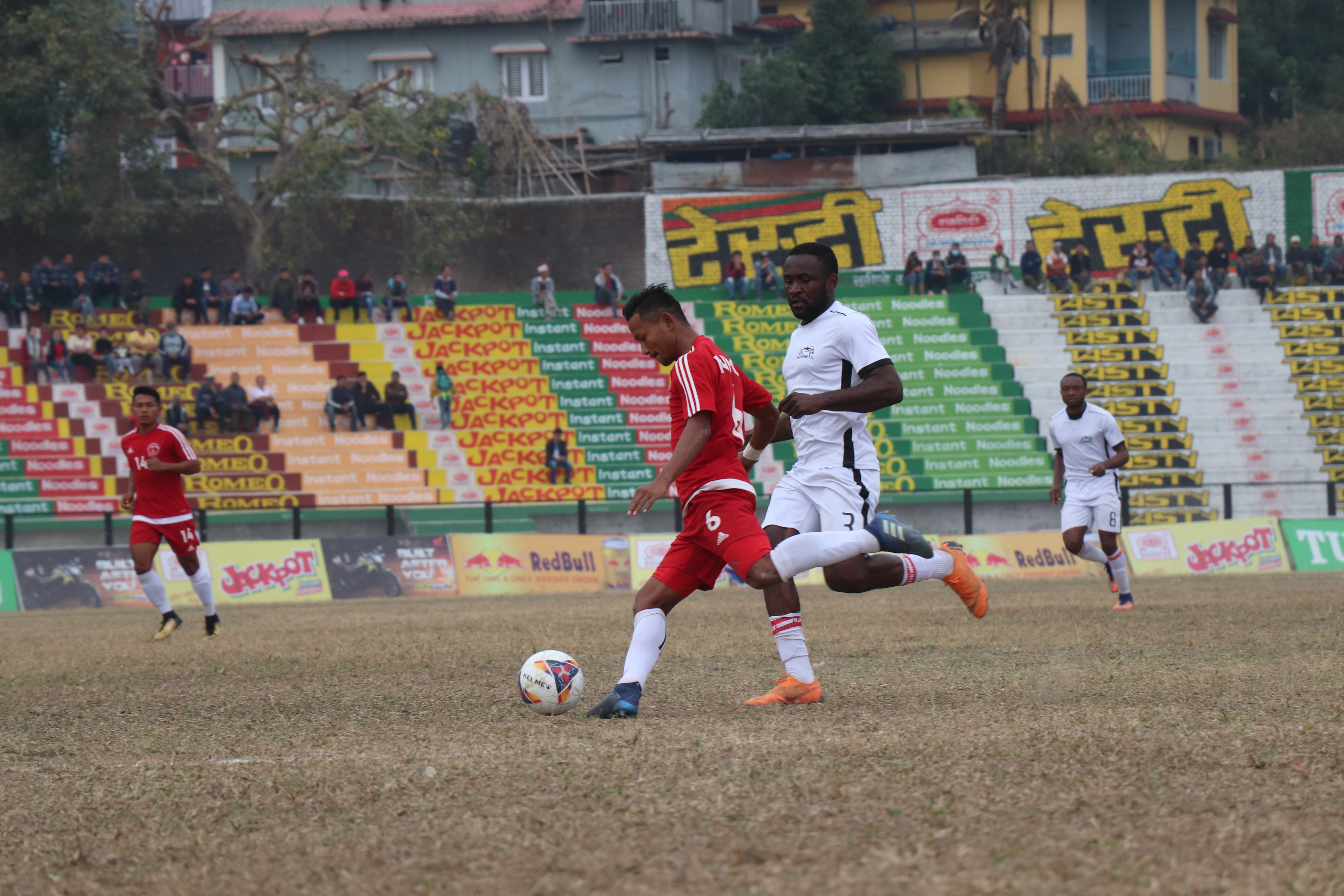 Players of Nepal Police Club (left) and Dauphins Family Club in action during their semi-final match of the 21st Budha Subba Red Bull Gold Cup at the Dharan Stadium in Sunsari on Friday. Photo: THT
Sunsari, February 15 Dauphins Family Club defeated Nepal Police Club in sudden death to advance to the final of the 21st Budha Subba Red Bull Gold Cup here at the Dharan Stadium today. The match went to penalty shootout after both the teams failed to score in regulation period. And they were deadlocked at 5-5 in tie-breaker. In sudden death, Dauphins goalkeeper Priso Ndjanga and Jo Angoula scored from the spot, while Nir Kumar Rai converted his kick for NPC and Bikram Dhimal’s strike was saved by Ndjanga. The Cameroonian side, who won the Manakamana Cable Car Pokhara Cup title last week, will play against hosts Dharan FC in Saturday’s final. In tie breaker, Silo Martins, Petnga, Biyik Biyik, Ekwem and Yaninick Owona scored for Dauphins, while Ajit Bhandari, Devendra Tamang, Bharat Shah, Tirtha Rana Magar and Hari  Kathayat converted from the spot for NPC. Both the teams created ample goal scoring chances but no one could convert them. Nir Kumar Rai of NPC came close to scoring in the 10th minute but he could not meet Bharat Shah’s pass inside the box. Dauphins custodian Ndjanga then made a brilliant save to deny Ravi Paswan in the first half injury time. Bharat Shah missed a sitter in the fifth minute of the second half. NPC coach Ananta Thapa said his side lost the match despite performing well in the regulation period. “The luck was also not on our part as the ball rolled into the goal despite a superb effort from our goalkeeper in tie-breaker. And we also could not convert the chances that came our way,” Thapa added.
#Nepal Police Club #Dharan #Dharan Stadium #Dauphins Family Club #Red Bull Gold Cup
You May Also like: