Davydenko through in Paris, closer to London 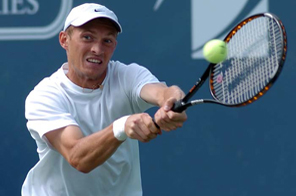 PARIS : Russia's Nikolay Davydenko eased into the third round at the Paris Masters by beating Germany's Benjamin Becker on Tuesday and took a step closer to securing an ATP World Tour Finals place in the process.

The sixth seed prevailed 6-2, 6-1 to set up a meeting with either Croatia's Ivo Karlovic or ninth seed Robin Soderling of Sweden, who is one of Davydenko's rivals for a spot in the year-ending tournament in London.

With six of the world's top players already qualified, Davydenko has a firm grip on the seventh qualifying berth and can make sure of his place by reaching the semi-finals here.

"There are guys here who need to win this tournament (to qualify for the World Tour Finals), just getting to the final is not enough," said Davydenko.

"It's a good feeling. With everyone here, (Roger) Federer and (Novak) Djokovic, it's a very tough draw and it's not so easy for (Jo-Wilfried) Tsonga or Soderling or (Fernando) Verdasco to reach the final and win the tournament."

Spain's Verdasco currently occupies the eighth and final qualifying spot and he can eliminate Czech Radek Stepanek and Croatia's Marin Cilic from the race to London if he beats Italy's Andreas Seppi later on Tuesday.

French defending champion Tsonga and Chile's Fernando Gonzalez are the two other players seeking to overhaul Davydenko and Verdasco, with Tsonga set to begin his title defence against Spain's Albert Montanes.

Davydenko broke Becker's serve in the German's second service game with a scuttling forehand winner and saw off four break points in the next game to open up a 3-1 lead, before breaking again to take control of the set.

Another early break gave him a 2-0 lead in the second set and he raced away as he had in the first to wrap up a simple victory in one hour and 18 minutes.

In Tuesday's early first round match, Spain's Nicolas Almagro of Spain beat Marco Chiudinelli of Switzerland 6-2, 6-4 and will face second-seeded compatriot Rafael Nadal in round two.

Nadal and world number one Federer form part of a star-studded draw in the 2.75 million-euro final Masters tournament of the year, with injured American Andy Roddick the only absentee from the world top 15.

#Davydenko through in Paris #closer to London
You May Also like: