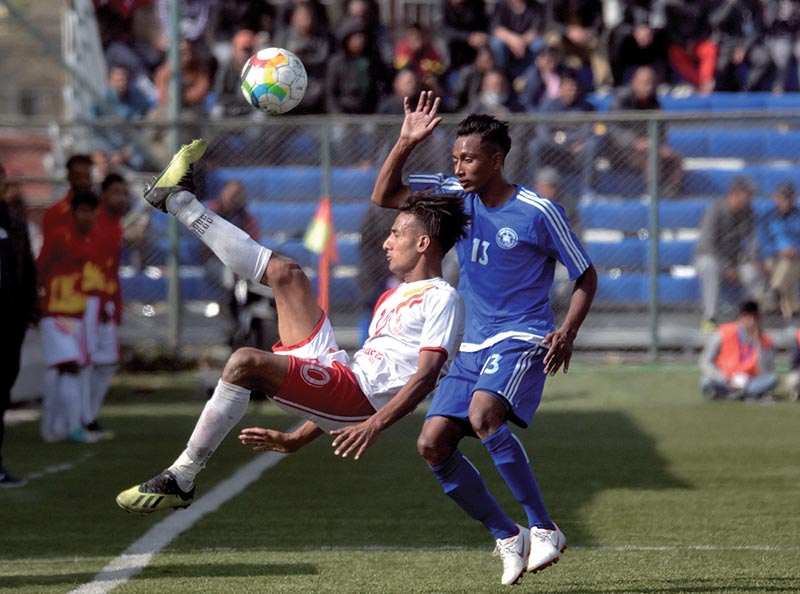 Yubraj  Khadka of APF tries an overhead kick under pressure from SYC’s Sabin Khadka during their Pulsar Martyrs Memorial A Division League match in Lalitpur on Sunday. Photo: Naresh Shrestha/ THT
Lalitpur, December 9 Ranjit Dhimal scored a brace as Ruslan Three Star Club defeated Grandmaster Jawalakhel Youth Club 2-0 in the Pulsar Martyrs Memorial A Division League here at the ANFA Complex grounds today. After a goalless draw between the two teams from Lalitpur, Dhimal opened the scoring in the 52nd minute. Kuldeep Karki of JYC handled the ball to stop an attempt from Sunil Bal and Dhimal converted the resulting penalty to put Three Star ahead with his fifth goal of the league. Dhimal doubled the lead in the 70th minute, from the set piece again and Kuldeep Karki was the culprit for the second time. JYC were reduced to 10 men after Karki received a red card for a dangerous tackle on Ranjan Bista outside the area. Dhimal converted the free kick into a sensational goal taking his tally to six. With their fourth straight victory, Three Star moved to second with 18 points from seven matches, level with leaders Signature Manang Marshyangdi Club, who have a game on hand. Three Star have not dropped a point since losing to MMC in third round. Sankata, also on 18 points, are third. In another match, Nepal APF Club outplayed Saraswoti Youth Club 3-0. Rup Bahadur Lama netted a brace and Yubraj Khadka scored one for the departmental side. Lama opened the scoring for APF in the 18th minute when he found the back of the nets following a corner from Shyam Nepal. Khadka doubled the tally in the 43rd minute with a solo effort from the penalty box. Lama then shut the doors for Saraswoti with his second goal of the match two minutes before the end following a pass from Shyam Nepali. APF accumulated 10 points from seven matches, while Saraswoti have six. At the APF Club grounds in Halchowk, Valley Chyasal Youth Club defeated NIBL Friends Club 3-1. Santa Bahadur Gurung scored a brace and Devendra Tamang added one for Chyasal, while Bikash Lama replied for Friends. In the day’s second Lalitpur derby match, Gurung opened the scoring for Chyasal in the 11th minute before Lama levelled the scores in the 20th minute. Tamang restored Chyasal’s lead in the 55th minute when he converted from the spot and Gurung scored his second goal of the match in the 69th minute to seal the victory. With their third win, Chyasal moved to seventh with 10 points, ahead of APF on better goal difference. Friends remained at the 10th position with five points from seven matches.
#Three Star Club #ANFA Complex grounds #Jawalakhel Youth Club #Martyrs Memorial ‘A’ Division League
You May Also like: