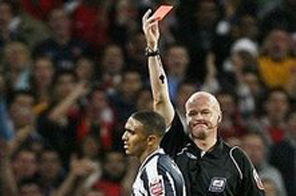 LONDON: West Bromwich Albion manager Roberto Di Matteo launched a stinging attack on Arsenal midfielder Jack Wilshere by claiming he used "insulting" language towards his winger Jerome Thomas during the Gunners 2-0 League Cup third round victory.
Former Chelsea star Di Matteo was livid with Wilshere's conduct in Tuesday's tie at the Emirates, which tilted decisively towards the home side when Thomas - who used to play for Arsenal - was sent off for shoving his hand into Wilshere's throat just before half-time.
Moments before, Thomas had clattered into the back of Wilshere's legs as they contested a loose ball, leaving the England under-21 international prone on the turf.
The pair were then seen to exchange angry words before Thomas lashed out, leaving referee Lee Mason with little option but to flourish the red card.
Di Matteo acknowledged that Thomas' violent reaction to Wilshere's behaviour made his dismissal inevitable but did not pull his punches when it came to apportioning blame for the flare-up.
"My player went to shake the Arsenal player's hand and he refused," he said. "There was an exchange of words, and then there was a reaction.
"I'm disappointed that Wilshere didn't accept his hand. He wanted to help him get up, actually. He's a fellow colleague. But, anyway, that's part of the game.
"I'm very proud of my players and my team. I'm not disappointed in my player. There was an exchange of words and he reacted. He reacted to what was said, something insulting."
Arsene Wenger, predictably enough, chose not to pass judgement on his player, instead providing a neat twist to his usual line when his side's conduct is called into question.
"I don't know what happened," he said. "My eyes are not great and my ears are even worse!
"I couldn't hear anything from the touchline. But I don't know. It looked like Thomas responded, reacted, and in these cases you always need to control your nerves. Has he any excuses or not, I don't know. But Jack was upset as well. He said he was kicked."
Wenger preferred to focus on the positive aspects of his young side's performance, most notably the display of Carlos Vela, who made a decisive contribution after coming on as a 58th minute substitute.
The Mexican, who had missed the whole of the season with an ankle injury, set up the first goal with a fierce shot that Dean Kiely could only parry into the path of debutant Sanchez Watt, who slid in from an acute angle.
Vela then made sure of Arsenal's place in the fourth round moments later when he blasted in from close range after capitalising on a mistake by Leon Barnett.
"When Carlos came on, he made a difference straight away," Wenger added. "He's dangerous in his control and his movement, his class. He can do something special.
"Carlos needs more time before he is involved in the Premier League. He was not even ready to start tonight. He needs to work but we count on him. He is in the first-team plans, of course. He gives you plenty of options."

#Di Matteo slams "insulting" Wilshere
You May Also like: