Djokovic clicks into gear, races to third round 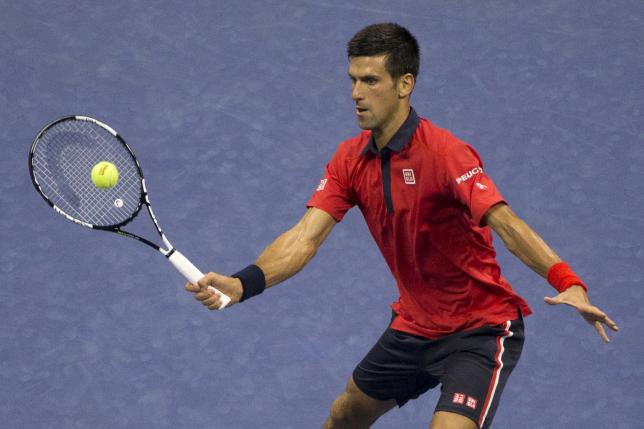 Novak Djokovic of Serbia hits a return during his second round match against Andreas Haider-Maurer of Austria at the U.S. Open Championships tennis tournament in New York, September 2, 2015. REUTERS
NEW YORK: Novak Djokovic took a while to warm up against Austrian Andreas Haider-Maurer but shifted into gear to close out the first set and then raced to a 6-4 6-1 6-2 win that closed Wednesday's play of the US Open. World number one Djokovic, who lost only three games in his opening-round victory, led 5-4 in an indifferent first set that went with serve before suddenly snapping into focus to break the Austrian to love. Flicking winners off his forehand and burying backhands deep into corners, the Serb dropped only three more games as he sailed to victory and a place in the third round. The reigning Australian and Wimbledon champion registered 27 winners and did not face a single break point in his demolition of 28-year-old Haider-Maurer, a winner of nine career Challenger titles but none on the ATP World Tour. Djokovic gave Haider-Maurer credit for bringing a blistering first serve. "I think he had an average serve of 130 miles per hour, so he came out firing from that shot in his game," said the top seed. "All in all, it was good to not stay too long on the court and get the job done in three sets," added Djokovic, who had enough energy left to dance on court with an entertainer who amps up the crowd at Arthur Ashe Stadium during changeovers. Djokovic is trying to claim his third grand slam singles title of the year and the 28-year-old Serb could not be blamed for thinking he is due for another US title to add to his 2011 trophy. Four other times (2013, 2012, 2010, 2007) he has been runner-up at Flushing Meadows and reached the semi-finals three other times. "For one reason or another I wasn't able to make that final step, too many times," he said. "But looking at the results over the years, it has been one of the most consistent tournaments I've had. Ever since 2007 finals, I've been making semis each year, so this definitely is in back of my mind. "Whenever I come here, I know that conditions suit me well, that I feel good on the court. I play very good tennis. I obviously try each year to get myself in a position to fight for the trophy. That's no different this year." Djokovic next plays Italy's Andreas Seppi, a 3-6 6-3 7-6(3) 6-1 winner against Russian Teymuraz Gabashvili.
#Novak Djokovic #US Open
You May Also like: