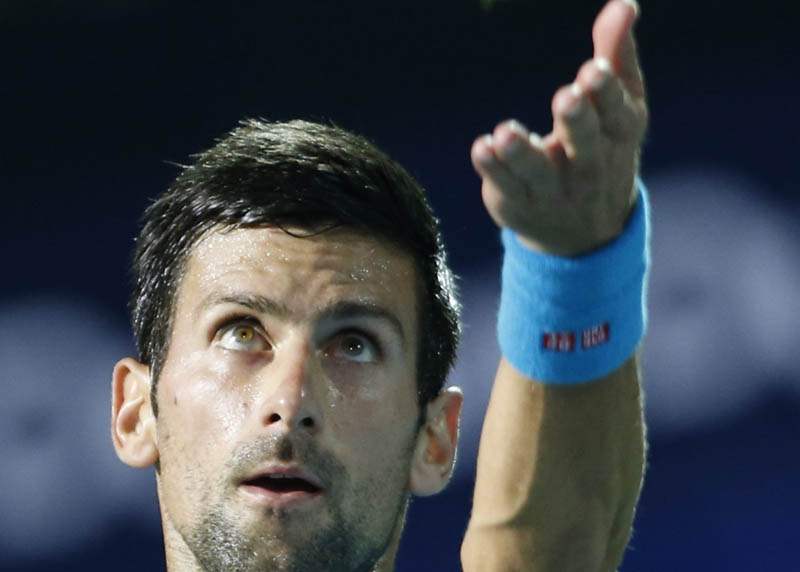 Novak Djokovic of Serbia serves to Malek Jaziri of Tunisia during their mens singles match of the Dubai Duty Free Tennis Championships on Wednesday. Photo: Reuters
Dubai, February 25 World No 1 Novak Djokovic recorded his 700th career win on Wednesday when he cruised past Tunisia’s Malek Jaziri and into the Dubai Tennis Championships quarter-finals. Djokovic won 6-1, 6-2 in 65 minutes and will face Spain’s Feliciano Lopez for a spot in the last four. The 28-year-old Serb moves to 12th on the all-time win list which is headed by Jimmy Connors of the United States who racked up 1,254 in his career. Djokovic is the third active player to pass the milestone, following in the footsteps of Roger Federer (1,067) and Rafael Nadal (775). The Serb had 25 unforced errors in what could not be called a perfect performance on Wednesday but which still carried him to 14-0 this season. “I’ve played a lot of matches and I’m very pleased and very proud of each win I’ve had,” said 11-time major winner Djokovic, who was presented on court with a gluten-free cake to mark the occasion. Organisers also created a #nole700 hashtag in honour of his latest achievement. “I started as a professional just over ten years ago. I love this sport with all of my heart and enjoy every moment of it. I expect a lot from myself, I’m trying to improve and get better in every element of my game,” he added. “But I know I’m not the only one who wants to be No 1 and win titles.” Djokovic admitted to some frustration as he closed out the win. “(After a set and a half) I started missing a lot of forehands, easy forehands from mid-court. It frustrated me, honestly, a little bit. But I managed to win the match. I’ll take the positives out of it and hopefully will be able to raise my game even more. “ Second seed Stan Wawrinka, who denied Djokovic a career Grand Slam with victory over the Serb in last year’s French Open final, needed five match points to beat Croatian qualifier Franko Skugor 7-5, 6-1. While not playing at his best, Wawrinka was not disappointed. “I got through in two sets and I’m into the quarter-finals. Now I can look forward to the next match,” said the Swiss star who next faces eighth seed Philipp Kohlschreiber. Flamboyant Australian Nick Kyrgios won his second match in less than 24 hours, after a late arrival in the emirate following his first career title last weekend in Marseille. The unseeded Kyrgios dispatched Kazakhstan’s Mikhail Kukushkin 6-3, 6-2 and next faces third seed Tomas Berdych, who he beat last weekend in the Marseille semi-finals. The Czech, however, will be bouyed by having knocked the talented 20-year-old out of the Australian Open last month. As clouds moved into the Gulf, conditions remained hot at 33 degrees Celsius at the Aviation Club, where Berdych tamed Italian qualifier Thomas Fabbiano 6-2, 6-2. “Kyrgios is doing well, for me it’s going to be a big challenge. I have a lot to get back after last week. I must refocus myself, try to raise the game, and play some good tennis again,” two-time runner-up Berdych said. “He’s full of fireworks on the court — in a good way. He’s playing really aggressive.” Fourth seed Roberto Bautista Agut claimed a 16th win of the season with a 6-0, 6-1 hammering of South Korean youngster Hyeon Chung. Bautista Agut, who has won two titles already this season, will next face Marcos Baghdatis after the popular Cypriot defeated Canadian Vasek Pospisil 6-4, 6-2. Two more seeds also reached the last eight, with sixth seeded Spaniard Lopez beating Czech Lukas Rosol 6-3, 7-6 (9/7). Kohlschreiber put out young Croatian Borna Coric 6-2, 7-6 (7/5).
#Novak Djokovic #Dubai Tennis Championships #Malek Jaziri
You May Also like: